Exchange 2016 CU4 has been released to the Microsoft download centre!  Exchange 2016 has a different servicing strategy than Exchange 2007/2010 and utilises Cumulative Updates (CUs) rather than the Rollup Updates (RU/UR) which were used previously.    CUs are a complete installation of Exchange 2016 and can be used to install a fresh server or to update a previously installed one. Exchange 2013 has the same servicing methodology. 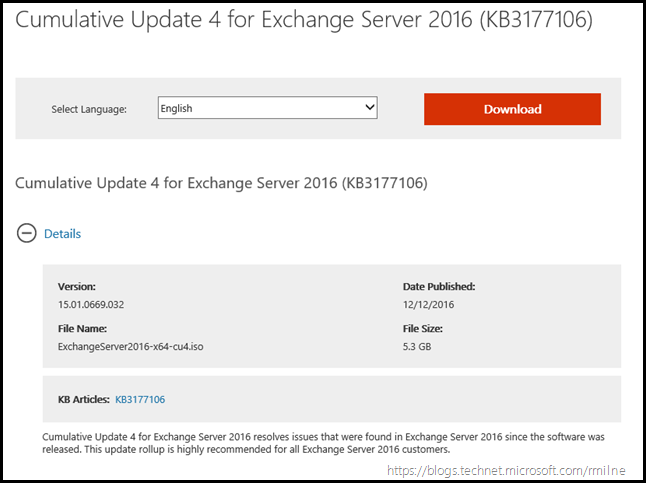 Exchange 2016 CU3 added support to install onto Windows Server 2016.  However, there was an issue with Windows which required that DAG based installations were paused.  The required fix has been released by Windows in KB3206632.  This update is required on Windows 2016 servers with Exchange 2016 installed.  CU4 will check if the update is installed, and will block the install if KB3206632 is missing.

The fix for the recent public folder indexing issues is included with CU4.  This was an issue introduced in both Exchange 2013 CU14 and Exchange 2016 CU3.  This is discussed in KB 3202691 - Public folders indexing doesn't work correctly after you apply latest cumulative updates for Exchange Server.  Note After you install this update on either version of Exchange Server, you should move the public folder mailbox to a new database to make sure that all items are indexed correctly.

On net-new installs the Desktop Experience feature is no longer required, since Windows has refactored how the components are installed in the newer versions of Windows.  This allows net-new installs of Exchange 2013 CU15 and Exchange 2016 CU4 to install less components than before as only the Media Foundation feature will be installed when using the /InstallWindowsComponents setup switch.  Since this is for net-new installs, upgrades to existing servers using either of the two aforementioned CUs will not change the installed OS components.  If you desire, you can add Media Foundation and remove the desktop experience after installing these CUs. This is optional.

KB 3202998 FIX: MSExchangeOWAAppPool application pool consumes memory when it recycles and is marked as unresponsive by Health Manager

KB 3209036 FIX: "Logs will not be generated until the problem is corrected" is logged in an Exchange Server 2016 environment