As mentioned in the release posts for Exchange 2013 CU16 and Exchange 2016 CU5, both of these Exchange versions now require .NET framework 4.6.2 on all supported OS platforms.  This post focusses on Windows 2012 and 2012 R2 installations, see note below about Windows 2016.

Update 25-1-2018  Since the older versions of Exchange 2013 and 2016 CUs are no longer available, the Exchange Support Matrix has been updated with the below:

When upgrading Exchange from an unsupported CU to the current CU and no intermediate CUs are available, you should upgrade to the latest version of .NET that’s supported by Exchange first and then immediately upgrade to the current CU. This method doesn’t replace the need to keep your Exchange servers up to date and on the latest, supported, CU.
Microsoft makes no claim that an upgrade failure will not occur using this method, which may result in the need to contact Microsoft Support Services.

Exchange setup will check for the presence of the required .NET framework, if not present setup will halt.

This is also true when extending the AD Schema and preparing Active Directory.  If the machine where you are running the AD preparation commands does not have the required .NET framework, then the installer will log an error.   In the below example a Windows 2012 R2 domain controller, the Schema Master FMSO role holder, was used to initiate the PrepareSchema command.  This failed due to .NET not being updated on that server where the Exchange 2013 CU16 setup command was being executed:

If setup was launched on a Exchange server which was missing the .NET update, the same error will be logged.  This will be after the additional pre-flight checks are performed.

MSDN documents How to: Determine Which .NET Framework Versions Are Installed.  In the .NET 4.5 and 4.6 versions we can review the Release key in the registry which is located under:

Consult the MSDN reference article for all of the details.  In short, current server versions will typically report the below values.  If you do not have a value of 394806 on a Windows 2012 R2 system then it is time to upgrade .NET.

We can check this quickly using PowerShell:

However, before upgrading .NET please review the next section.

Please plan accordingly to ensure that .NET and Exchange are updated correctly in the right order.  You may also need to update additional machines if you require that separate teams must execute the AD and domain preparation steps.  This is common in larger customers, since the Exchange administrators will not have Enterprise Admin or Schema Admin rights in AD.

After updating .NET to 4.6.2 on the Schema Master, the Active Directory and domains can now be prepared. 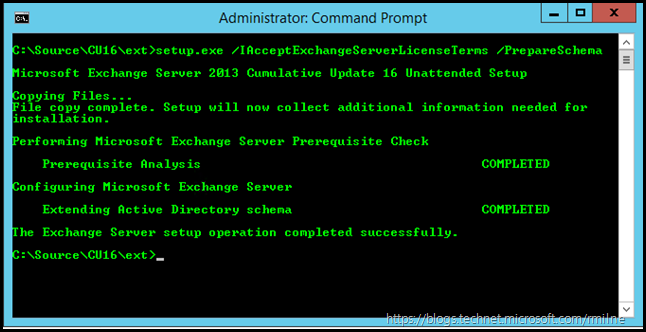