After a small delay the Exchange team have announced the eagerly awaited release of Exchange 2013 Cumulative Update 1!   Knowledge base article 2816900 contains a description of CU1.  This update will allow on premise installations to co-exist with Exchange 2007 and Exchange 2010. 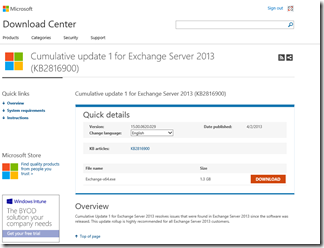 CU1 marks a change in how updates are going to be released and supported by the Exchange team, and this is detailed in a previous post.

You can to start thinking of a CU like a service pack in previous versions of Exchange, though it is not 100% the same.  There are several good reasons for this:

And for many customers who had issues with managers of Distribution Groups after moving to Exchange 2010 it is great to see that Group on Group action is back!!!  Groups in Exchange 2013 can now manage groups!

Note that Exchange 2013 does NOT support

Keep a weather eye on the Exchange 2013 forums to see what feedback the community has!