In a previous post we discussed a scenario where users were delegated the capability to create Mail Enabled Contacts in Active Directory using a custom RBAC role.  As part of the solution, we enabled the MyDistributionGroups Role.  While this may meet the needs of most organisations it does introduce one issue where users who are assigned such a  Role Assignment Policy can edit Distribution Groups they own but also create new ones.

This post is based on Exchange 2010.  If you would prefer an Exchange 2013 specific post, please view this entry.

How can we solve the challenge of allowing users to managed Distribution Groups that they own, but also prevent them from removing or adding new ones?  Well, it’s a similar story to the previous blog – we will create a custom RBAC Role!

This scenario calls for having multiple Role Assignment Polices as each will have a different configuration.  For example you may envision the following:

Let’s get jiggy with it, and create a new Role Assignment Policy!  **

$Roles will then contain the following Roles:

When creating the new Role Assignment Policy called DG-Management, we provide the $Roles variable which contains the saved roles.

All the Management Roles that can be assigned to a Role Assignment Policy  are prefixed with “My” to indicate that they are for user RBAC.  This is a list of the Exchange 2010 roles starting with the prefix “My”:

The Management Role Entries for MyDistributionGroups is shown below along with showing that this is a built-in role and is intended for end user purposes.

Then removing the new and remove distribution group cmdlets:

Checking to see the current Management Role Entries, note the New and Remove cmdlets are gone:

Once happy, will assign this custom Role to our new Role Assignment Policy.

Note that we can do most RBAC work in ECP after Exchange 2010 SP1, though I still prefer PowerShell as that was what I had to learn initially.  Old dog, new tricks etc….. 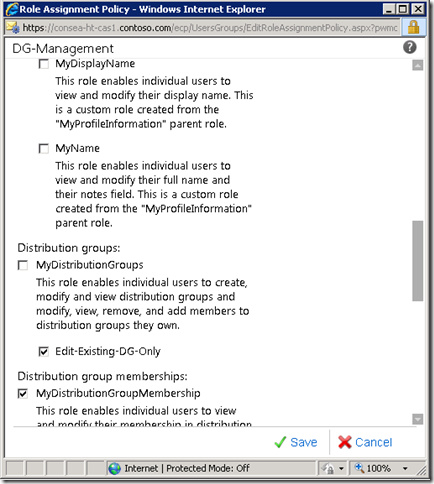 When user-20 then opens up ECP, they have the following capabilities, note that there is no New or Delete button under “Public Groups That I Own”. 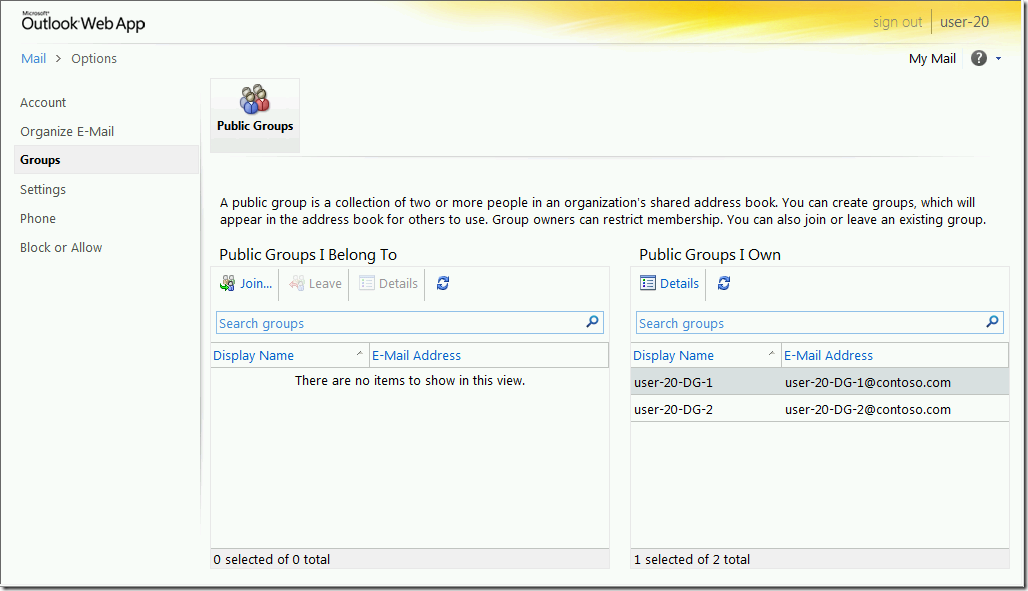 For a Distribution Group to show up, it must have the ManagedBy attribute set.  In this test org there are several DGs, but only the ones that user-20 has ManagedBy appear.

We can see that the basic steps to tune and customise RBAC are very similar to the previous blog on delegating Mail Enabled Contact creation.  There are some differences as we are creating a custom Management Role to be used as part of a Role Assignment Policy though all the concepts still apply.

** – Forget the music and stuff Will Smith, where is Independence Day 2 anyway ?!?!?