When troubleshooting various Exchange issues it can be very beneficial to get a network capture to look at the actual packets going over the wire.  For example when looking at Outlook connectivity issues we can enable Outlook client logging and RPC Client Access Logging on the Exchange Server.  Both are both great troubleshooting tools and while we can solve a lot of issues with that information, there can still be great value in looking at the actual network packets.  Is there some inline WAN optimisation device that is causing an issue or do we see retransmits? 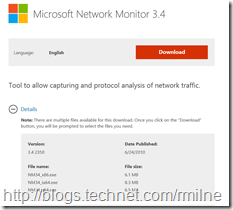 Unlike in days of old * we do not install the full version of NetMon from the SMS installation media, it can be downloaded from the Microsoft Download Centre.

Note that there are separate packages for x86, x64 and Itanium installations.  Ensure that you chose the correct type else it will not install.

Installing Network Monitor is straightforward.  It will install the tool itself, and then the parsers which are required to split and analyse the traffic.  The parsers that come with the Netmon download are a bit out-dated nowadays.  The latest parsers can be downloaded from Codeplex.   Installing the newer parsers will overwrite the older ones.

By default Netmon 3.4 will install into C:Program FilesMicrosoft Netmon 3.  This folder is used for both x86 and x64 installations since the image type is native to the OS.

I won’t go into detail in using the Netmon GUI, rather let’s focus on the command line aspects of capturing.  As it can be easier to capture data this way rather than explaining what buttons or options someone has to select in the UI.  From a Microsoft perspective this allows us to send out a command that we know will be correctly executed and the required data gathered.  Else the data could be missed and we have to wait for another occurrence thus delaying the troubleshooting.

The GUI Network Monitor executable file is Netmon.exe.  For command line work we need to use NMCap.exe.

Some quick examples before we go down the rabbit hole……

To explore all of the command line options open an elevated CMD prompt, and change directory to C:Program FilesMicrosoft Netmon 3 directory.  Once there run

I’ll let you pick through all of the syntax, but there are a couple to note.  First up, the file extension controls if circular logging is used.

There are various start and stop conditions that can be used.  They can be time or action based.  If noting is specified use Ctrl + C to stop the capture.  Take a look at the help for more details on /TerminateWhen, /StopWhen and /StartWhen.

Capturing Data Via The Command Line

In Short the command line steps are:

One thing to note!  There are options to limit the networks that data will be captured on.  For example Nmcap.exe /Network 3 could be used.  How do we know what networks are present, and which interface is what?

This example starts capturing all TCP frames and will be saved in a capture file name tcp.cap. If you want to stop capturing, Press Control+C.

This example starts capturing network frames that DO NOT contain ARPs, ICMP,NBtNs and BROWSER frames.  If you want to stop capturing, Press Control+C.

This example starts capturing network frames that are TCP Continuations. The capture filter is searching for String "Continuation in TCP Frame Summary Description. In order to see the complete list of Netmon Properties that are filterable,type ".Property" in the Netmon Filter UI.

This example starts capturing network frames at 3:17 PM on September 10, 2002.  All DNS frames that contains the QRecord Questions name 'my_computer' will be saved in a capture file named dns.cap. The size of the capture file will not exceed 6 megabytes. If the user presses x at any time during this capture, the program will terminate, otherwise the capture will stop 10 minutes after it has begun.

This example starts capturing network frames after 10 seconds past. All IPv4 frames that received by local machine which has IP address 192.168.0.1 will be saved in a capture file named ip.cap. The size of the capture file will not exceed 4 megabytes (the default size). If the user presses c at any time during this capture, the program will terminate, otherwise the capture will stop 10 minutes after it has begun.

Starts capturing network frames immediately. All TCP frames that have a source port or destination port of 80 are saved to the chained capture files named test.cap, test(1).cap, test(2).cap, ... When the user presses the 'x' key the program stops.

Starts capturing network frames immediately. All syn TCP frames that have the specified IPv4 network address are stored into to the capture file t.cap. The program stops when the TCP connections ends.

This example starts capturing frames and will be saved in a capture file name result.cap. If you want to stop capturing, Press Control+C. When the free disk space is less than 20% the total space of current disk, capture will stop as well.

The examples below are from real troubleshooting incidents.  Note that %computername% is embedded into the output file so that we can easily identify which capture is which.  Just like in 1994 and we have CV~1.doc, CV~2.doc and CV~3.doc on a floppy disk, it’s a real pain looking at a bunch of files called capture.cap.  Yes we can place them in folders, but they often get messed up!

One of the neat things is that NMCAP uses the same filter syntax as Netmon.exe.  That means you can tweak and develop the capture filter in the UI and then transpose it.

In the examples below we are using the Blob mechanism to determine the data that we want to capture.  While this is not explicitly documented in the NMCap help content, it does fall within the [FrameFilter] section.  As discussed on the NetMon team blog, to create a filter using the Blob, you need to know the offset and length of the pattern you are matching. Often, the simplest way to do this is open a trace you’ve taken from the network you are interested in, and click on the field in question. Then look in the hex details for that location and offset.

Below is an example of this.  We have highlighted the IPv4 Destination Address field.  Note in the Hex Details pane, the Frame Offset is then show as 30 with the Sel Bytes of 4.

Neat, eh?  I have to thank Curtis Houck for introducing this to me

While it is possible to use this syntax for filtering, this many not be the  most optimal in a high volume traffic scenario.  In such cases we can convert the IP address to HEX and use that in the filer.  For the above example, let’s do that conversion to HEX, the staring filter is:

I do this in two steps, firstly the IP octets are converted to HEX using the Windows calculator.

Then the periods are removed, and the HEX prefix of 0x  is added

In this example we will capture on any network, limiting FrameLength to 256 Bytes  with an series of chained output files each of which are limited to 100 MB.  The capture filter uses the Blob methodology described above for high performance parsing.   Blob(FrameData,26,4)==192.168.16.5  is the filter for IPv4 Source Address.  Blob(FrameData,30,4)==131.107.2.200  is the IPv4 Destination Address filter.

This example is similar to the

* – I still think that I miss having to re-install the service pack on NT and getting prompted to restart just by looking at the network connection properties.  I think….