When discussing and reviewing Office 365 with customers, I wanted to have a series of posts to illustrate the steps involved when deploying Office 365.   In the burgeoning drafts folder Active Directory Federation Services (AD FS) was at the top, so that got finished first!

The IT security landscape keeps evolving.  One of the recent changes is a move away from ACLs on files in the NTFS file system to an access control system that is based on claims.  Claims based authentication is an industry standard security protocol to authenticate users.  This is the underlying WS-* standards that describe the usage of Security Assertion Mark-up Language (SAML) tokens.  Claims based auth requires these tokens, and by extension an entity that can issue the token.  This is the Secure Token Service (STS).  The STS server can be based on Active Directory Federation Services (AD FS) or other platforms that provide this service.

AD FS lights up one of the three options for Office 365 identity management, which is option #3 in the below list:

Some customers will use these services as they do not wish to invest in a fault tolerant and geographically dispersed AD FS implementation.  The availability of AD FS is a key discussion point when discussing federation.  For whatever reason if the AD FS infrastructure is unavailable, then Office 365 cannot complete the authentication process and thus users cannot get access to Office 365.

In addition since DirSync now replicates the user’s hashed password to WAAD, some customers now use DirSync to provide Same Sign On / Single Sign On (SSO).  DirSync version 1.0.6385.12, which was released in May 2013, and latter builds provide the ability to synchronise passwords.  DirSync can be downloaded here, and the TechNet Wiki has details on the release history.   When running the configuration wizard with this release you will get the shiny “Password Synchronization” window: 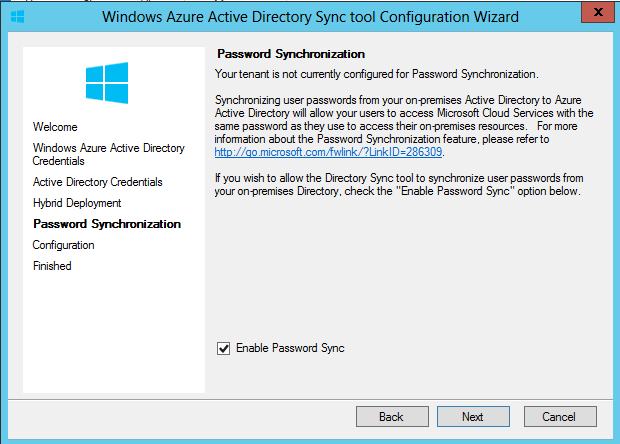 This is worthwhile to mention as there is still a perception that AD FS is a hard requirement to get SSO.  That is soooooooooooo  Q1 2013!

Anyway, I digress let’s get back to AD FS…..

We shall look at installing AD FS 2012 R2 since there are numerous compelling features in this release!

The quick answer is a lot!  Some examples include:

There are many others, but check here for them since we are focussing on Office 365 usage for AD FS.

Note that you will not see me  call this release AD FS 3.0.  Its full and proper name is  AD FS 2012 R2.  for reference here are the older versions and what some folks call them:

Planning And Prerequisites, And Other Fun Details

The prerequisites are listed on TechNet and now also on docs.microsoft.com.  Of course before jumping into the install the installation needs to be planned.

The AD FS role should be deployed within the corporate network, and not in the DMZ.  The AD FS proxy role (WAP in Windows Server 2012 R2) is intended to be installed into the DMZ.

We can now use a standard service account or a Group Managed Service Account in AD FS 2012 R2.

In this case since the KDS root key was not configured, lets leverage a standard service account.

The installation process should set the required Service Principal Names (SPN) on the account.

Select what name you are to use to access AD FS.  Typically this is along the lines of:

Note that this is the namespace for the AD FS service.  Since we will be using Kerberos to access AD FS internally, there must be a Service Principle Name (SPN) registered for this name.  This will be associated to the service account, and since SPNs operate in the “Highlander – there can be only one!” mode you do not want to duplicate the SPN on the AD FS server by naming the computer the same as the AD FS namespace.

You also want to discuss what display name should be chosen, as this will be visible to users.

This would be enterpriseregistration.tailspintoys.ca in this environment.

The AD FS server will require access to the Internet in order to complete the configuration of the solution.  This may be an issue if your servers are behind a proxy solution.

Since AD FS leverages SSL, we need to have a SSL certificate.  You could try three options, but only one will work:

Please follow the documentation from your chosen CA to request, install and complete the certificate.  The steps required vary from vendor to vendor and also over time.  Make sure you are not missing any updated intermediate certificates!  How would you know?  Follow their  process!!

For the purposes of this post we shall deploy the initial AD FS server, and in the future add another AD FS server for redundancy.

If you wish to use the Device Registration Service (DRS), then add the additional name onto the certificate.  Even if you are not using DRS now you may want to save the time updating certificates later on. 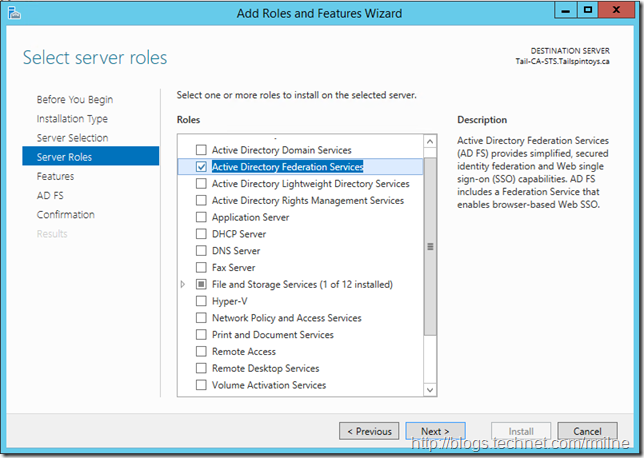 We don’t need to add any additional features.  Remember that the IIS dependency was removed in AD FS 2012 R2. 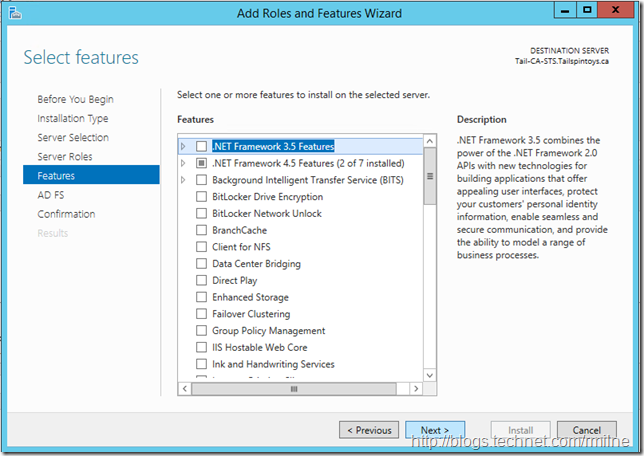 Clicking next takes us to the AD FS splash screen.  Note that it helpfully tells us that the specific AD FS proxy role has been removed in Windows 2012 R2 and how to go about installing it.  Shame I missed that the very first time  I ran this, and could not find the old school AD FS Proxy role… 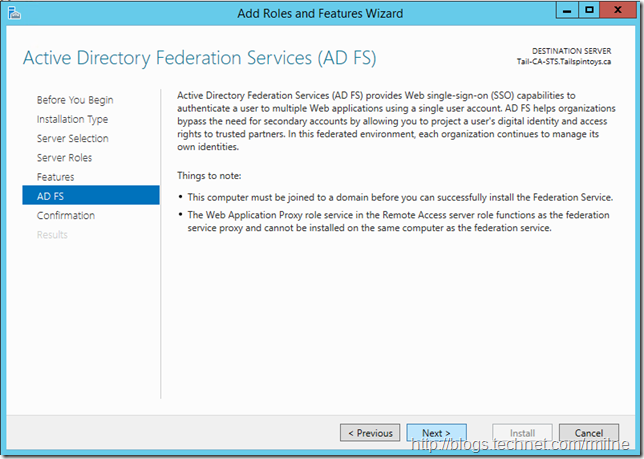 Clicking next will then install the necessary bits. 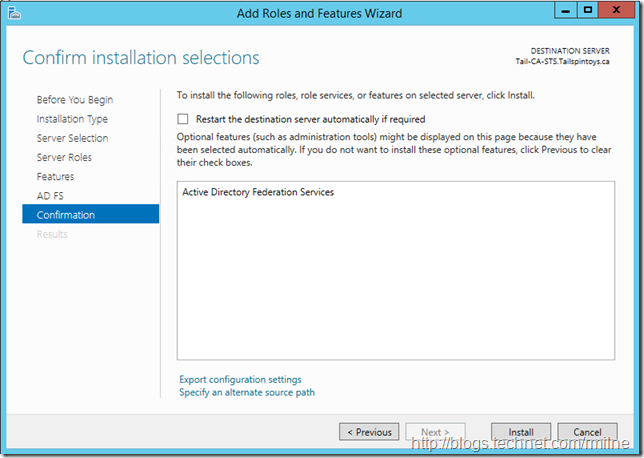 Bits are being shuffled around… 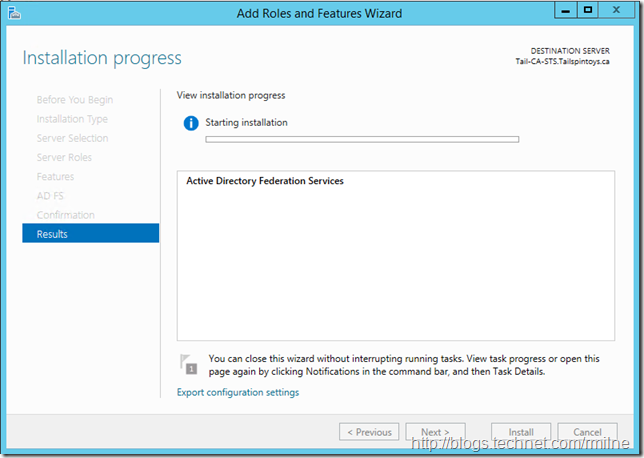 Shuffling has been completed, and the installation is complete.   You can launch the AD FS configuration wizard from here, or alternatively if this window is closed it can be launched from server manager. 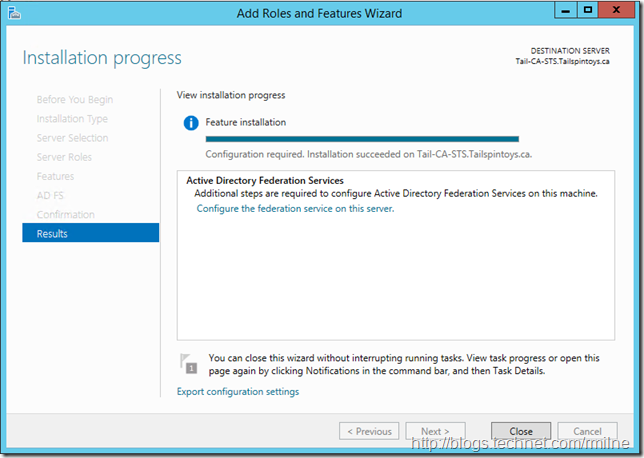 Before starting the AD FS configuration wizard I already installed my 3rd party certificate and tested that is was correctly installed.

The wizard also states that you must have access to Domain Admin (DA) credentials!

Note that you are only given an option to either make a new AD FS farm or add this box to an existing farm.  This saves the painful issue from older AD FS builds, where AD FS was not installed into a farm you were then unable to add the second AD FS server for redundancy.  In that case you had to build a net new farm. 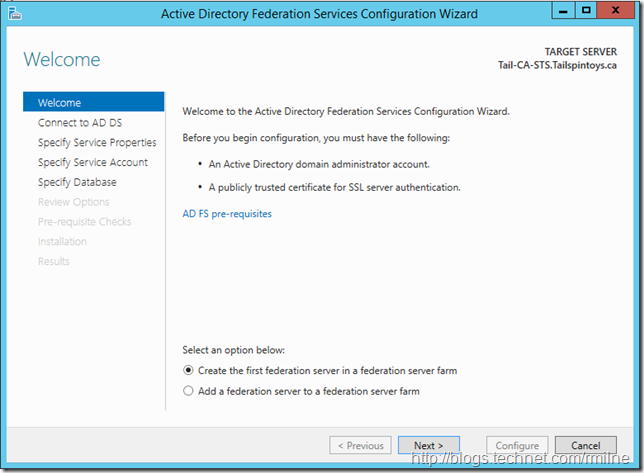 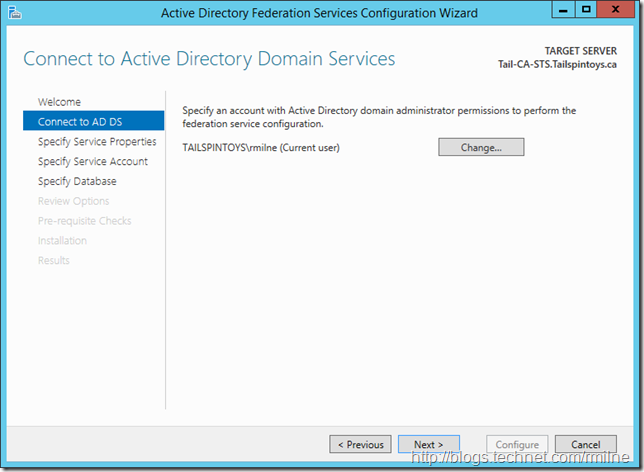 We need to select the SSL certificate that we will use and also provide the AD FS name we selected in the design process.

In this case the name is adfs.tailspintoys.ca   -- note that there is no concept of an InternalURL or ExternalURL for the AD FS namespace.  Clients will use the same name on the intranet and internet to locate AD FS.  Thus split DNS will make life simple! 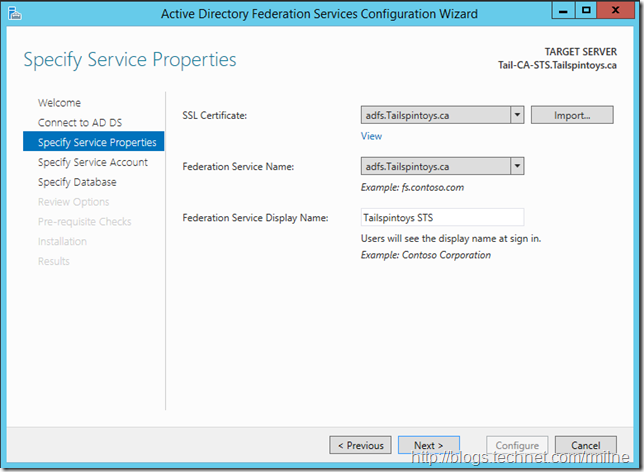 As mentioned earlier it is possible to use a GMSA as the AD FS service account.  GMSA will automatically update the service account’s credentials and administrators will also be oblivious as to its password.  Note that if you do want to use a GMSA, please review the required setup for this, noting the DC version requirements and the steps you must manually perform.  Add-KdsRootKey

In this case a standard service account was used. 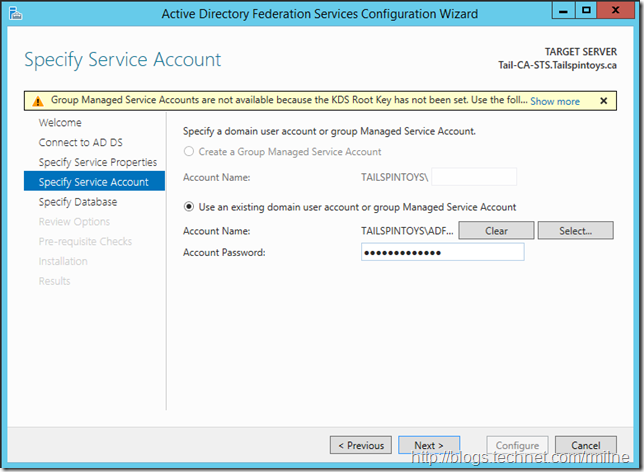 Select the database configuration as per the design.

The Tailspintoys corporation will use WID. 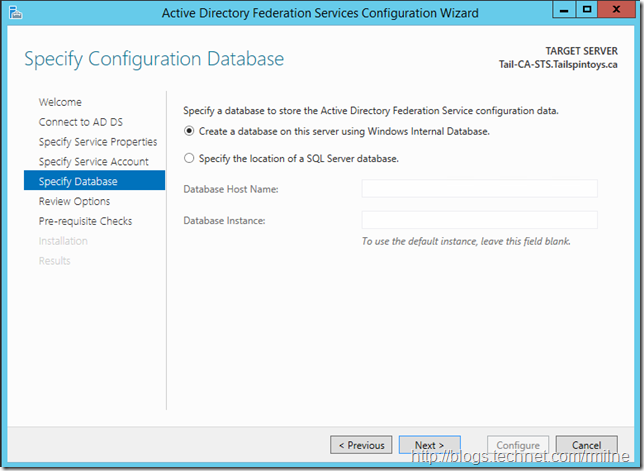 Review the options, and when happy pull the trigger! 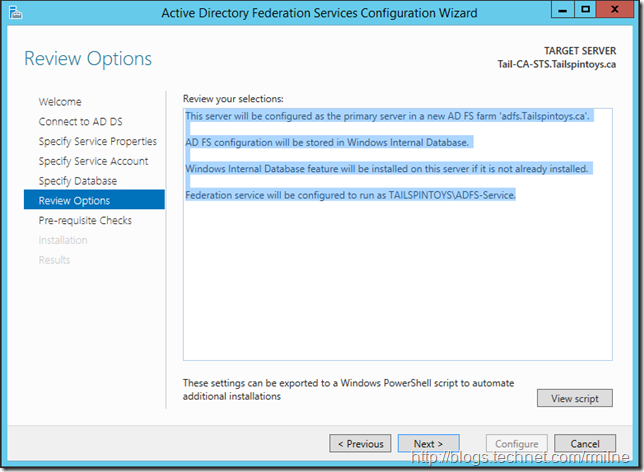 For reference the PowerShell script is shown here:

The AD FS pre-requisite checks are done, and we can proceed to the configuration: 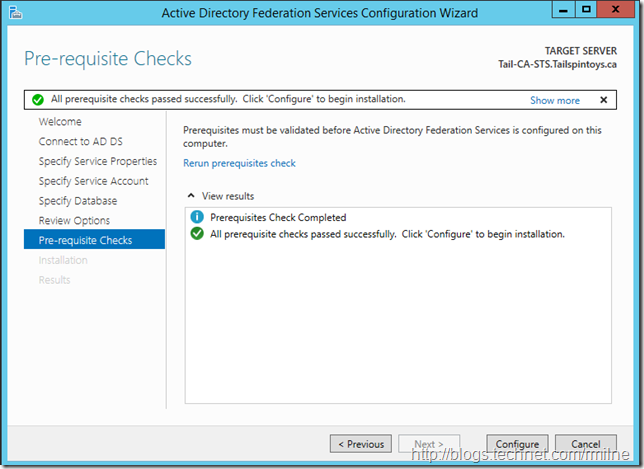 One coffee later, we have a shiny new AD FS server – whoo!! 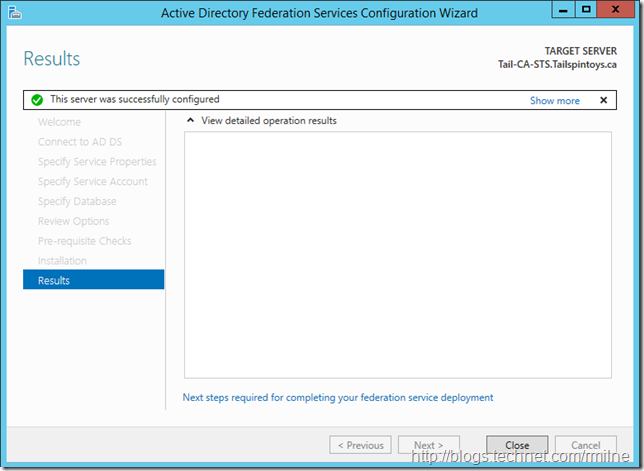 We are not quite done yet, and there a couple of additional things to do!

When multiple clients (over 200 clients) try to sign in by using an Active Directory Federation Services (AD FS) proxy, the AD FS proxy consumes 100% usage of the CPU. In this situation, the AD FS proxy performance is slow, and causes a delay that exceeds 10seconds. This also causes STS to work under minimal load. Therefore, STS rejects the requests or serves only 5 to 10 requests per second.

We must create the DNS record  for the AD FS instance.  This maps to the AD FS namespace that we previously planned.  Create this A record in your internal DNS infrastructure.

Ideally you will have two AD FS servers for resiliency, in which case you will need to create a load balanced VIP for this service.  Please follow the steps for your specific LB device.  The DNS A record should resolve to the VIP.   For testing purposes, use a hosts file on a client to check out individual AD FS servers – do not try and just use the IP address of the box.

Once the DNS record has been created and propagated, ensure that it resolves correctly.

One thing to mention here, if you create a CNAME and point that to the server hosting AD FS chances are that you will run into a never ending authentication prompt situation.

In the below example the AD FS namespace is called adfs.tailspintoys.ca and a CNAME was used to direct traffic to the AD FS server called tail-ca-sts.tailspintoys.ca.    This will likely cause the client to obtain a Kerberos ticket for the incorrect name. 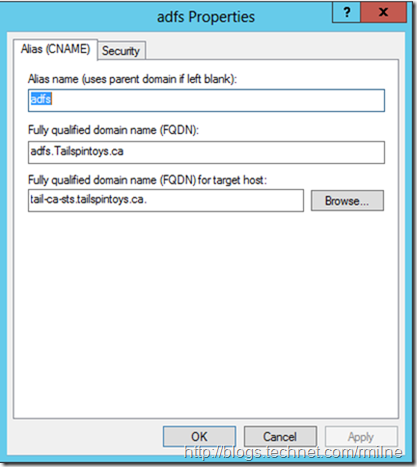 The easiest way to stop this is to use  a regular A record, like so: 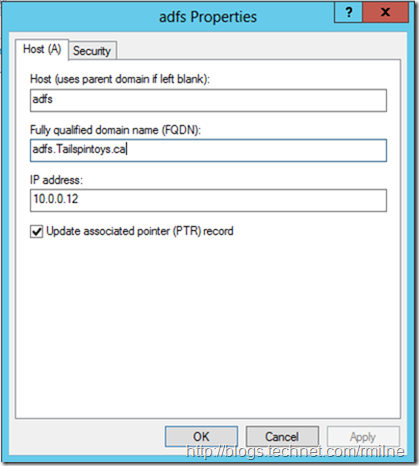 There is also an option contained in KB 911149  that some folks have mentioned.

This topic covers additional steps to configure AD FS after you install the first federation server, including:

This will be something like the below, just change the FQ DN to match your environment.

The result should show this: 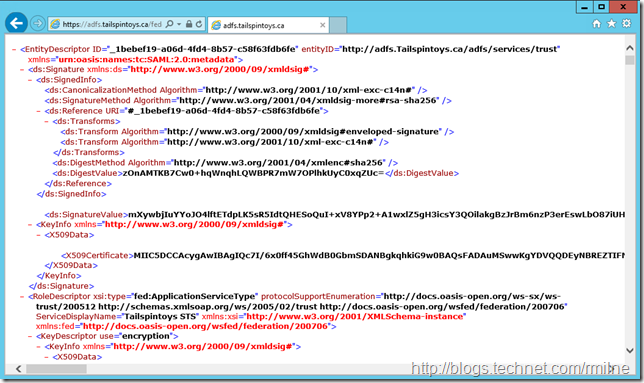 Browse to the AD FS sign-in page and test that you are able to authenticate.

The URL will be similar to the below, again change the FQDN to match your organisation’s.

You should see the below, and be prompted to sign in: 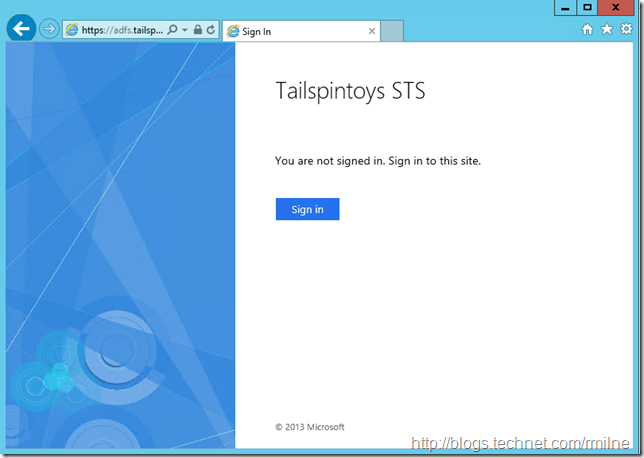 Depending upon how IE is configured you will either be prompted to provide credentials or be automatically signed-in.

If you want to have users be automatically signed-in then configure your browser settings to trust the federation server role by adding your federation service name (for example, https://adfs.tailspintoys.ca) to the browser’s local intranet zone. This will enable seamless sign-in using Windows Integrated Authentication. 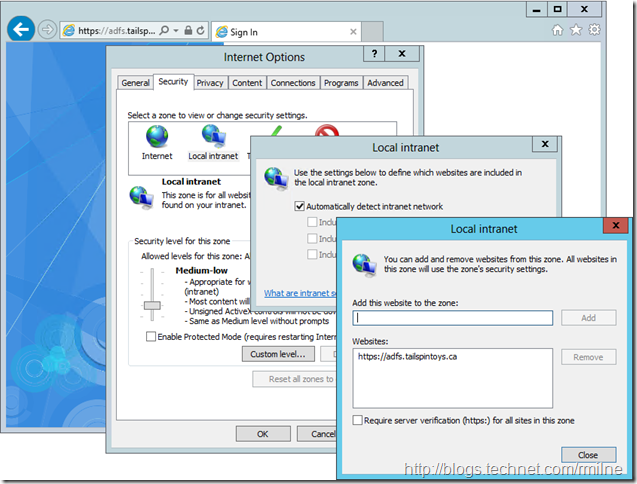 Once we are happy that the AD FS instance is functioning appropriately we can then move onto installing the AD FS proxy role (WAP).

This will be covered in the second post in this series, to prevent this one getting too long!