However there still seems to be a trend not to use PowerShell remoting and directly load up the Exchange 2010 or 2013 snapin.  An example of what we should not be doing for Exchange 2010 and 2013 is something like:

How should we connect to Exchange PowerShell?  Use PowerShell Remoting!

Unless you are following a specific process that is documented by Microsoft or are working with a Microsoft support representative, the only way you should be connecting to Exchange is the method documented above. One example of an exception to this rule is in the Exchange 2013 release notes.  Note that the page also cautions:

Loading the Microsoft.Exchange.Management.PowerShell.SnapIn Windows PowerShell snap-in and running cmdlets other than the *-TransportAgent cmdlets is not supported and may result in irreparable damage to your Exchange deployment.

As noted above, TechNet only documents that PowerShell remoting should be used.  Typically this means that we will use the following process to connect to an on-premises Exchange 2010 or 2013 server.

In the below examples we provide credentials and store them in the $UserCredentials variable.  They are then presented as part of the configuration of the PowerShell $Session.  Finally the PowerShell session is imported.

(Please note they are three separate lines which may wrap)

With each of the above examples, the commands can be executed one line at a time, or saved into a PowerShell .PS1 script.

Once we have completed our work, the PowerSession should be removed to clean it up. 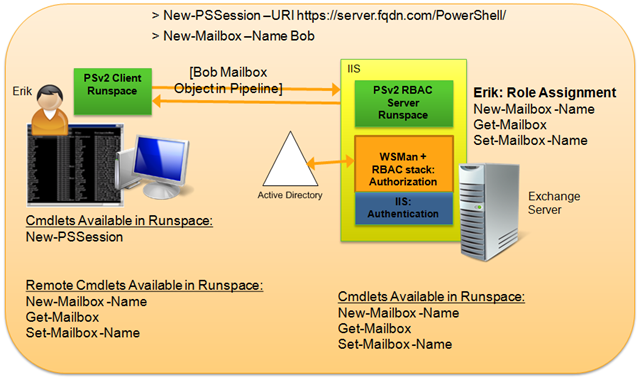 One common question that arises, is why is TCP 80 used? Does this not mean that the traffic is not secure since that is the HTTP port rather than the HTTPS port? Yes this is the well known HTTP port, but the traffic is protected using the Kerberos authentication of the person connecting. If you look closely at the PowerShell remoting code included at the top of this post you will see that the authentication type is indeed Kerberos. If you try and force the PowerShell virtual directory to enforce SSL then you will not be able to connect. Administrators normally discover this when cascading settings down from the root of the web site. When we connect between different forests Kerberos authentication is not available, for example from on-premises to Office 365. In such cases the connection must be HTTPS and basic authentication is used. The credentials are protected with the SSL stream so there are no security issues.

For examples on connecting to local and remote Exchange forests please review this post.