One of my colleagues emailed with an issue on their laptop.  After travelling to the customer location, his power supply had “died” as it was not charging the machine.  This was a Lenovo W541 with the new rectangular power connector, which meant there were no spares readily available.

Later that day when I arrived at my hotel, my W541 did the same thing.  Chances of two laptops from different batches failing with the same issue on the same day are low.

Unfortunately, I could not blame this on the networking team so the next question asked was what did I change?  The only thing was that I worked on the airplane, and put the laptop into airplane mode using the Network Settings popup from the system tray.

Surely that would not prevent the laptop charging?  Don’t call me Shirley!

Let’s enable airplane mode from the network icon’s pop-up menu.  No bonus points for guessing where I’m staying this week….

The left Image shows we are initially connected to the Wifi.  Clicking Airplane mode, as the expected result of disabling Wifi. This is the right hand image below. 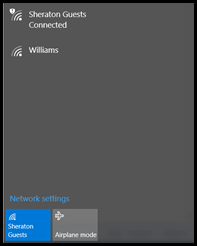 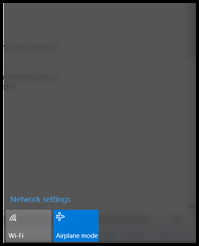 All good so far.  If we look at the power plans specified in the Control panel the Airplane power plan was also activated. 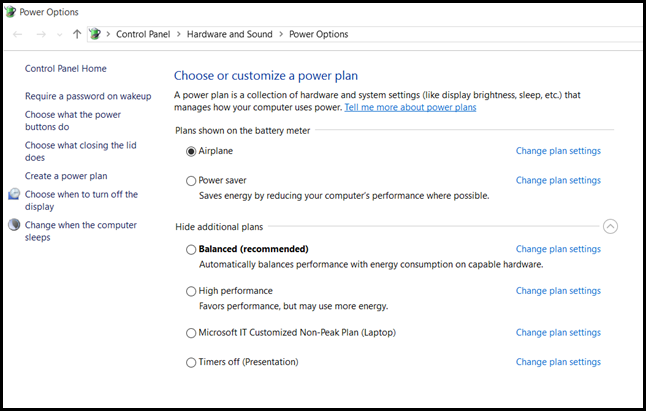 We can also look at the command line to verify the current power plan :

Taking the laptop out or airplane mode allowed it to start charging as before.

Just in case you find your laptop not charging, double check to see if it is still in airplane mode.  What my colleague noted was that if the laptop lid was closed, then the machine would charge, but would stop charging after opening the lid and Windows 10 would resume.

In the above situation this was a fully patched Windows 10 RTM build, and the hardware was also fully updated (BIOS, drivers etc.).