This is one of those little things that make life much, much easier.  Imagine the scenario; you go to eject a USB disk drive or USB flash and Windows tells you that it is still in use.  How to track down which application is using the drive?

In the below example, the USB flash drive E: will be ejected.  Or at least, we will try... 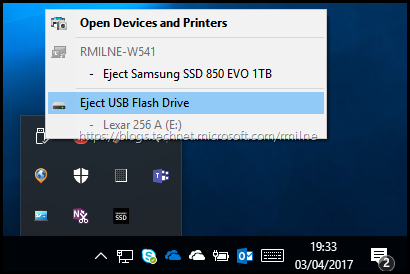 Alas, no!  There is a problem ejecting the USB mass storage device.

Who, What Is Using The Drive

Previously this would mean using Sysinternals Process Explorer or handle.exe to figure which process had a lock onto the file.

Windows 10 reports this into the System event log in EventID 225.  No need to run additional tools!

As an example below, Microsoft Word from Office 365 Professional Plus had a file opened on the E: drive with pending changes that had not been saved.

When trying to eject the USB drive, the executable and its Process ID (PID) are returned. 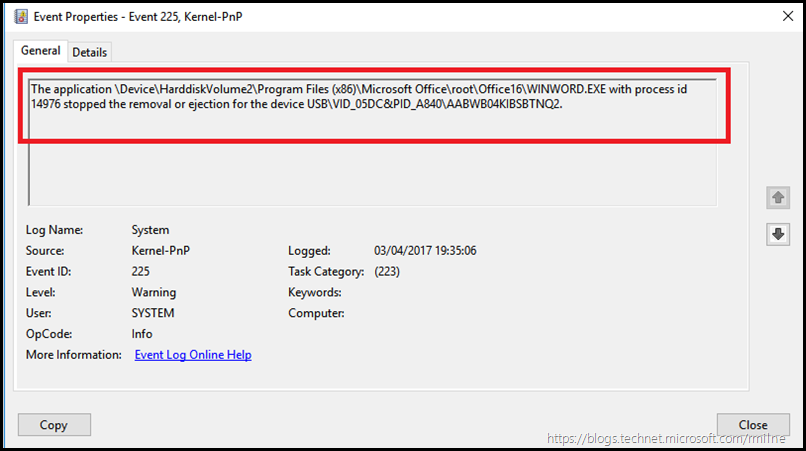 The user then knows the application using the USB drive, and can take the appropriate action.  This could be to finish off the task, save the changes to the file and close down the application.

Interestingly enough, when testing this Windows 10 allowed the drive to be ejected even though Word was running.  There had to be unsaved changes to prompt the above behaviour.