An issue came to light when onsite recently with a customer.  The design specifications from the Exchange team were not being correctly implemented.  In this environment there is a separate Windows team who are responsible for managing the underlying server OS and hardware.  They are to follow the prescribed process and steps laid down by the application owner but this was not consistently happening.

This was a customer who used an Exchange 2013 Database Availability Group (DAG) and Just a Bunch of Disks (JBOD) storage.  The JBOD disks are held locally in the server’s chassis, and JBOD is part of the Prescribed Architecture for Exchange.  The Exchange team anted to ensure that the NTFS cluster size on the JBOD disks was set to 64KB.  This was done and confirmed in the initial build.

Rather than logon to dozens of servers, it was far quicker to write a quick script to automate the process.

The below example shows the default output.  It will also write to a .CSV file so that the data can be easily filtered and manipulated in Excel.  All disks attached to each Exchange server are reviewed.

Note that you can see the Disklabel, DiskBlockSize, NTFS Cluster Size in WMI terminology, on the right had side.  The DiskName was also included for reference. 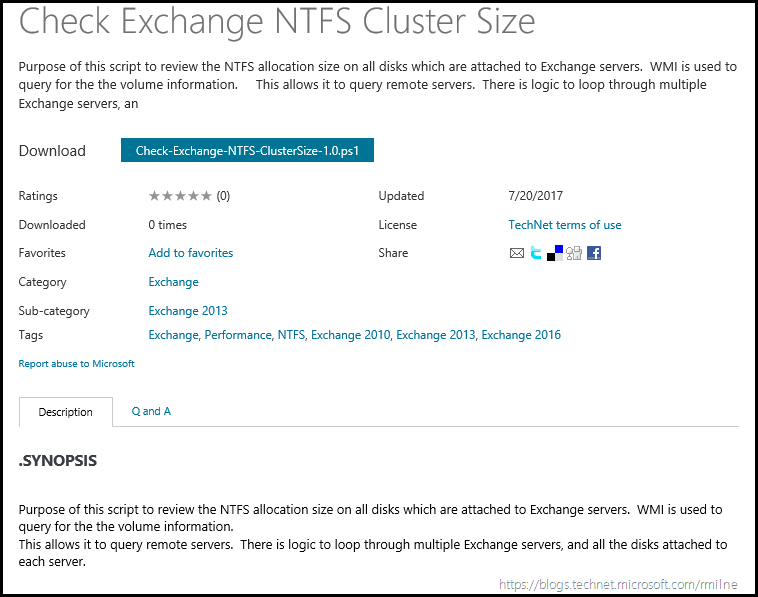 Please leave comments and feedback as a comment to this blog post or as Q & A on the GitHub repository.