Travelling to see different customers from one side of Canada to the other is always interesting.  This post is written whilst in Vancouver and is from a reported customer issue waaaaay out East.

The Exchange admins pointed out that they were consistently running into an issue when they applied an Exchange Cumulative Update (CU) to a server.  The 3rd party file system anti-virus client then started to run rampant and spawn multiple processes consuming all of the resources on the Exchange server.

Being the clever cookies that they are, the Exchange admins were able to determine what was causing the issue.  What they noted was that the Exchange CU install was adding a Null path statement in as an system environment variable.  We can easily see this in a couple of ways.

Opening up system properties, and clicking on Environment Variables shows the below.  Note the highlighted section and the space between the semi colons. 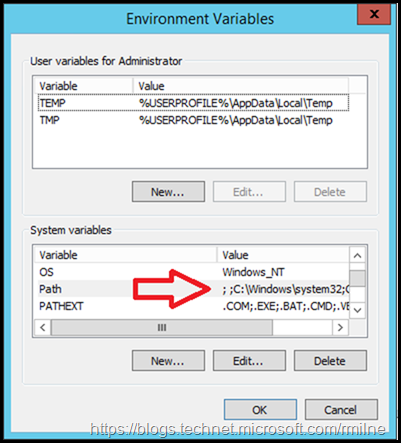 This is also visible using the cmd prompt.  Again note the space at the start of the path statement.

The above screen shots were taken from an Exchange 2013 CU20 server which was installed on Windows Server 2012 R2.

To address the issue the customer was manually remediating the path variable by removing the null entry and restarting the server.  This must be checked and verified after each server install or CU update.

The issue is also meant to be corrected in an updated version of the anti-virus client, which is currently being evaluated and rolled out in their enterprise.