This may manifest itself in a few ways.

Let's take a brief look at how Exchange is configured, and what it looks like from a tools and troubleshooting perspective.

We can group ports into three main categories:

Both system and user ports can be used to represent the port an application is listening on.  IANA and Wikipedia have pages which list known applications and their respective port.  The port ranges apply both to TCP and UDP.

Microsoft platforms now adhere to these recommendation.  To comply with Internet Assigned Numbers Authority (IANA) recommendations, Microsoft has increased the dynamic client port range for outgoing connections in Windows Vista and Windows Server 2008. The new default start port is 49152, and the new default end port is 65535. This is a change from the configuration of earlier versions of Windows that used a default port range of 1025 through 5000.

If you want to view the relevant configuration, run these commands:

Key Note: The default dynamic port range for TCP/IP has changed since Windows Vista and in Windows Server 2008.

However, Exchange does something a little bit different.   Starting with Exchange 2007, when you install Exchange the installation routine will modify the port range.  Exchange 2003 scalability was limited by the underlying x86 architecture and the associated system and memory pressures.  Exchange 2007 moved to x64 and freed us of that challenge.  It did raise up new scalability challenges with Outlook Anywhere though.  Recall that a single user accessing just their mailbox via Outlook Anywhere (OA) would consume a minimum of 4 TCP ports.

From the same article there is a note referencing this change:

The below are included as a reference and as examples to what you will see when looking at network traces or the server configuration.

Traffic was generated by browsing to this blog, IP 40.71.183.196, and then searching the connections looking for that destination IP.

A current Windows 10 client is shown first, then a range of different versions of Exchange.

This is a Windows 10 client.  Adding the start port and number of port values gives a total of 65,536. 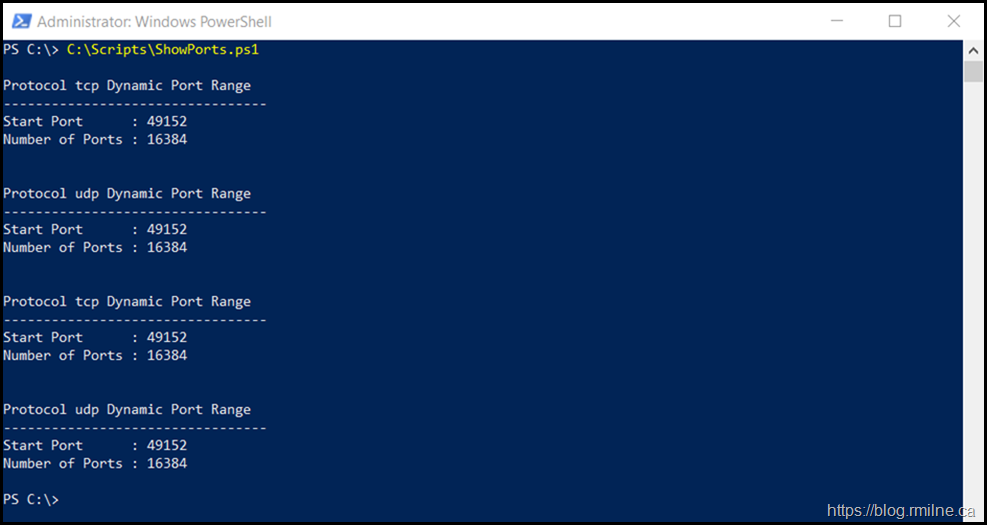 If we browse to a website (this blog) and look at the connections to the IP we can see that the ephemeral ports used are in the expected range.  In the image below you can see ports TCP 60,691 and 60,693 are used.

Installed on Windows Server 2012 R2.  Note the difference between UDP and TCP ranges.

That is because this is a perfectly valid range since the registry was update to use this different range.

Same goes for the default DAG replication port of TCP 64,327.