Install the Microsoft Defender for Identity (MDI) sensor onto a newly built DC?  Easy you say, and that should only take 5 minutes.   Well, if that was the case there would be no need for this post, and as my Dad would say, there is no such thing as a 5 minute job.

The below is a brand new Windows Server 2019 DC.  It was built, fully patched and then promoted.  Next up is to install the standard Microsoft Defender components, in this case the Microsoft Defender for Identity (MDI) sensor was installed first.  That did not go so well, and we got error 0x80070643. 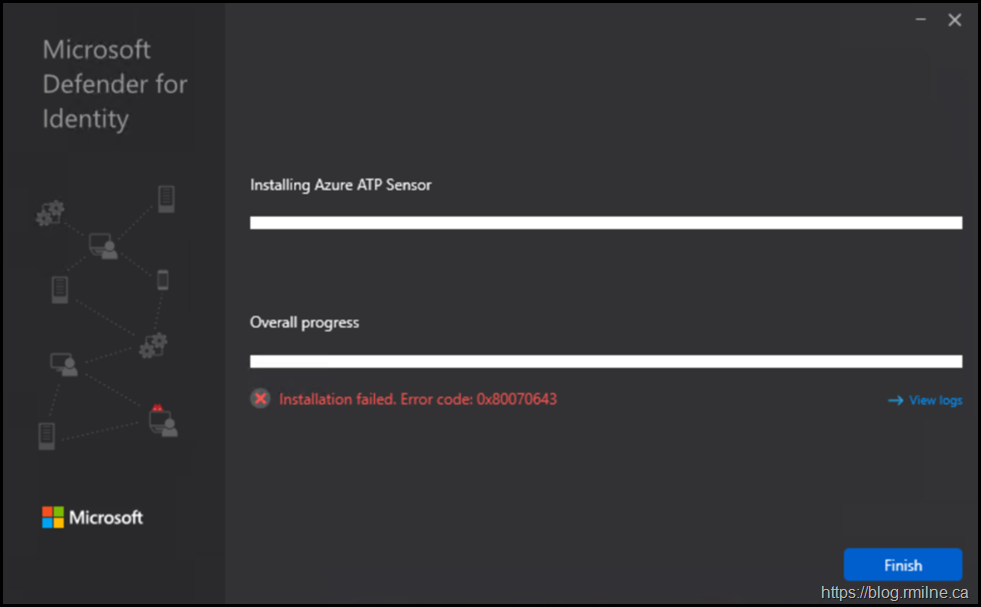 The server would show up briefly in the MDI Console, as the sensor tried to install, and then disappear as the install was backed out since it failed.

You can see that in the animated GIF below. Maybe play this song as you watch it?

Clicking the view logs link in the install screen takes us to the %TEMP% location for my account, since it is running under my context.  The full path is:

Error codes were visible, but no real data as to what caused it and a root cause.

At the end of Deployer Log, an EventLogException Deployer failed message was logged.  A couple of interesting things are highlighted.

This is interesting as it is an unauthourized access statement. If your audit policy is set to include failures, you will see an audit failure associated to the install.  The Event log shows an Audit Failure getting the “Act as part of the operating system” (SeTcbPrivilege) privilege

The account running this is a full EA.  Why?

The current workaround is to install the sensor in system context using either:

In the example below we will use PsExec.

Adding All The Permissions

This is an example of where the Sysinternals tools can be useful (yet again!).

To elevate to system context we can use PSExc.exe from the Sysinternals suite.  Personally I prefer the https://live.sysinternals.com site to just grab what is needed.

PSExec was downloaded onto the system and it could be used as a one-liner or interactively.

Since we are installing using the command line, the Defender for Identity Silent option was used.

In the example below, note that the AccessKey is redacted.  It was also changed prior to publishing this post.

If you would prefer to run the command in an interactive manner, just launch a new cmd.exe process using PsExec as shown below.

The spawned CMD window will launch, and to prove that we are in system context, a WhoAmI was used prior to running setup.

Now that the sensor is finally installed, we can see it on the dashboard.

This post focusses on a particular issue with MDI and Windows Server 2019, but this is not the first time that error code has surfaced.  There are multiple issues which may cause an error code such as this.

Some of the other MDI troubleshooting steps that I've used on other cases include: