When designing an upgrade strategy from an older version of Exchange to a newer one, a question that needs to be addressed is do we need to introduce a version of Exchange that may not currently be present?  This may be when upgrading from Exchange 2013 to Exchange 2019.  If that organisation currently does not have any Exchange 2016 servers, you need to evaluate if there may be a future requirement for one in the future.  Examples include:

Once that first Exchange 2019 server is installed it is way to late to go back and introduce Exchange 2016.  Actually its before the installation, but hold that thought for now.  The same is also true when upgrading from Exchange 2010 to Exchange 2016, if there are no Exchange 2013 servers in the organisation.

The Point Of No Return

Morale of the story? You should not need schema admin permissions for your day to day role, even for a highly trusted administrator.  Grant and revoke schema admin membership as needed.  Less is more!

Running Exchange 2019 setup checks the current status of Active Directory and the Exchange organisation.  Besides warning that some infrastructure bits are missing, it does warn that if you continue with this course of action, you will be unable to introduce older versions of Exchange if they are not currently present.  In the below example, this is a fresh AD 2016 forest with no existing Exchange organisation.  Since no organization currently exists, the name of the new organization must be specified: 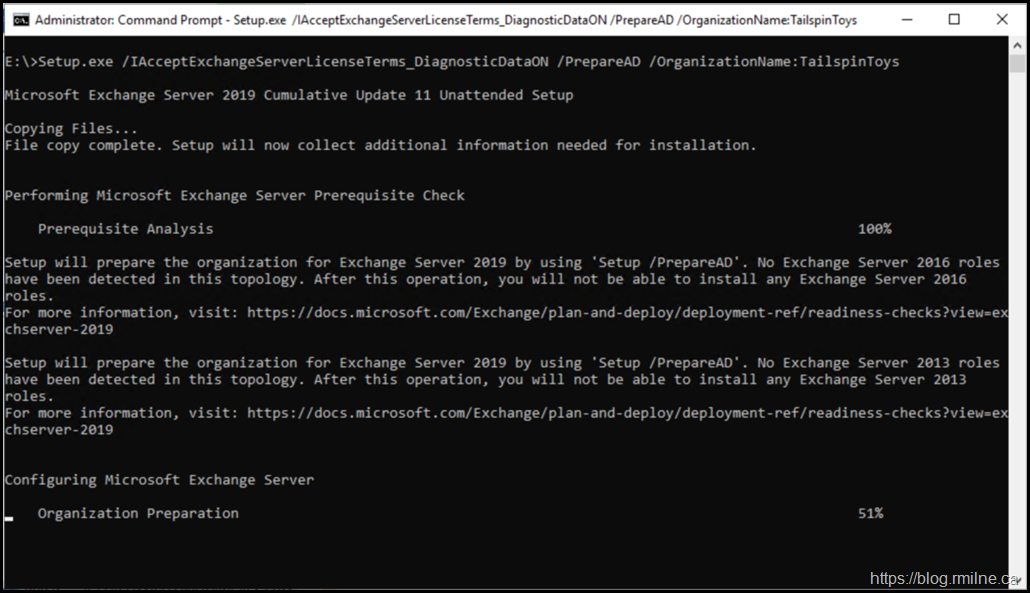 For the Search Engines:

What if I want to retain the ability to install an older version of Exchange, what do I need to do?

The simplest solution is to properly deploy a virtual machine, install Exchange 2016, configure it and keep it patched and running.  Should you ever need to install a production Exchange 2016 server, since there is still an existing Exchange 2016  mailbox server in the organisation you are able to do so.

Should you reach the point where there are no business requirements for Exchange 2016,  Exchange can then be gracefully uninstalled from the virtual machine and life continues.