For a while now I’ve been using the Netsh SkipAsSource Flag to allow multiple IPs on a server and only the primary IP registers in DNS.  The previous series of articles in this series are here:

Life was good until Shawn Martin added a comment asking about a hotfix for Windows Server 2012 to fix a previous issue from Windows Server 2008 R2.  Hotfix 2554859 was noted in the original article, but I had not experienced the behaviour on Server 2012 as I was not using the GUI.

Unfortunately, this issue also manifests itself in Windows Server 2012, though the last bullet is slightly different.

This is our starting configuration.  A simple setup with a single IPv4 address bound to one NIC.

Let’s use PowerShell’s New-NetIPAddress cmdlet to add an additional IP 192.168.10.121 and specify the –SkipAsSource parameter. 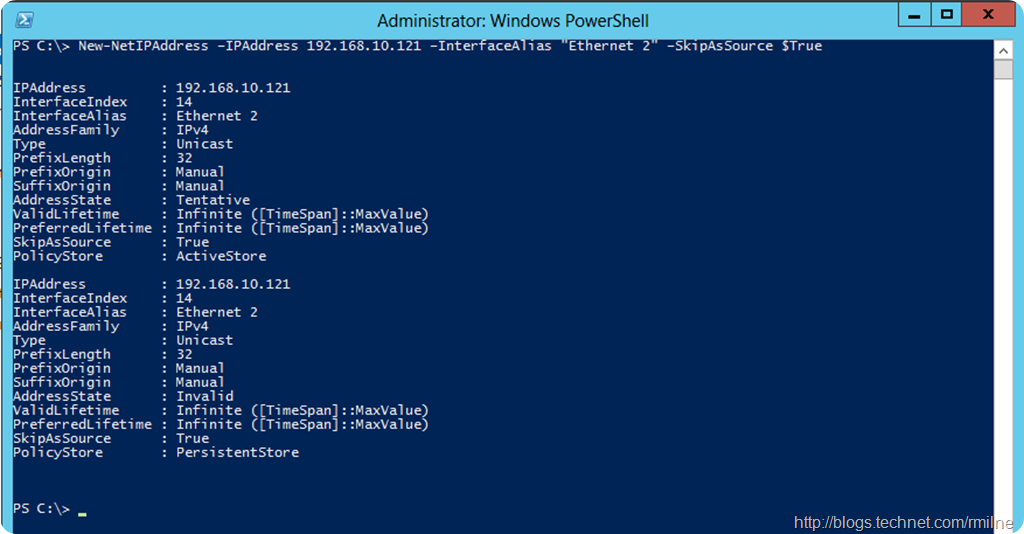 Looks OK, but we shall verify…

So far so good!  Time to change it up!

To replicate the issue, let’s now make a change to the IP we just added through the GUI, and change the subnet mask: 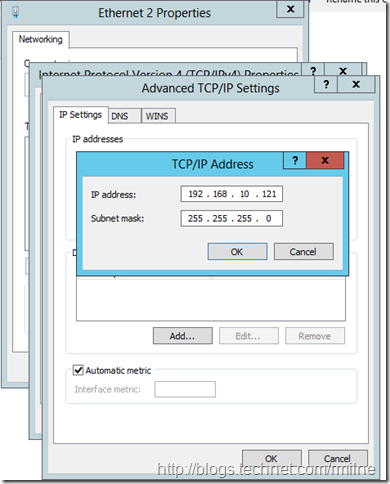 Interestingly enough if we add multiple additional IPs, each of which is set to SkipAsSource $True, and we only edit IP 192.168.10.121 in the GUI; only that specific IP loses it’s SkipAsSource flag.

At this time to please do not edit the IP configuration of a machine where SkipAsSource is used via the GUI.  PowerShell can be used to configure IPs where this feature is used.  If the GUI is used the SkipAsSource will be set changed for the IP(s) that were modified.

This is an example of using Set-NetIPAddress to change the PrefixLength (Subnet Mask) to /24.  Note that even through SkipAsSource was not explicitly used in the Set-NetIPAddress cmdlet, the original setting was honoured