Exchange 2013 Service Pack 1, Exchange 2010 SP3 RU5 and Exchange 2007 SP3 RU13 were all released today, the 25th of February 2014.   As announced back in November the Exchange team were working to test and validate Exchange against Windows Server 2012 DCs.   That work has been completed, and the support stance has been updated on TechNet.

To prevent confusion for folks that may have read this post prior to today’s updated support stance it has been heavily edited to reflect the new information.  Probably not much point showing out-dated stuff, eh?

TechNet documents the Exchange Product Group’s supported OS for each version of Exchange.  Here are the links for your convenience:

The support matrix for all of the Exchange versions have been consolidated into one location.

There have been a couple of posts in the TechNet forums where people have run into some issues when they have either:

Unfortunately there is not much that can be done to help apart from digging out backups as they are not supported options.

The following table identifies the operating system platforms on which each version of Exchange can run. Supported platforms are identified by an X character. 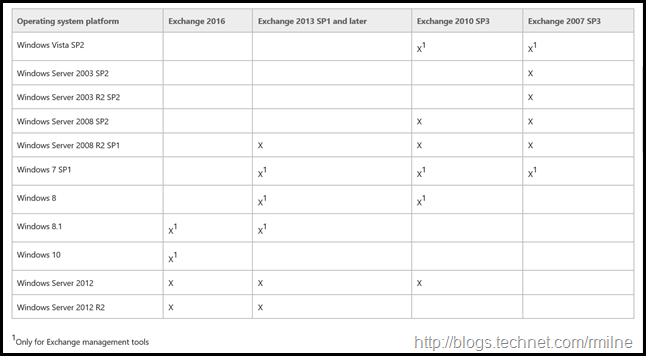 The following table identifies the Active Directory environments with which each version of Exchange can communicate. Supported environments are identified by an X character. An Active Directory server refers to both writable global catalog servers and to writable domain controllers. Read-only global catalog servers and read-only domain controllers aren't supported.

Previous update history to this post for full disclosure:

Update 12-11-2013: Added note to indicate TechNet has updated support stance to say Exchange 2013 support  for Windows Server 2012 R2 will be provided by future version of Exchange 2013.

Update 25-2-2014:  Re-wrote this post to reflect the current support stance

** Well you never know I suppose….