Back in May 2013, we discussed an issue which caused the Hyper-V Did Not Find Virtual Machines To Import error.  Well, as mentioned in that blog post there are a few reasons for this error message being displayed and it does depend on the versions of Hyper-V in use.

There were some comments posted (thanks again for that by the way!) which mentioned an issue with importing VMs into Windows Server 2012 R2 and Windows 8.1.  I thought it may be worth bubbling this up again now that Windows 8.1 is available and people may be running into the same import issue.  Ideally we can raise awareness so that we can plan the right approach.

Let’s take a peek at the issue, and then discuss what we can do!

For the purposes of this post, let’s try and import a VM called AD1HC1.  This was successfully exported from Windows Server 2008 R2 Hyper-V.  Currently this VM and all its associated files reside in the G:VMsAD1HC1 folder.  The various files can be seen here:

There are no hidden tricks and this is an exported VM that can be imported to Windows Server 2008 R2 without issues, and has been many times.

If we use the GUI and try to import the VM into Windows 8.1 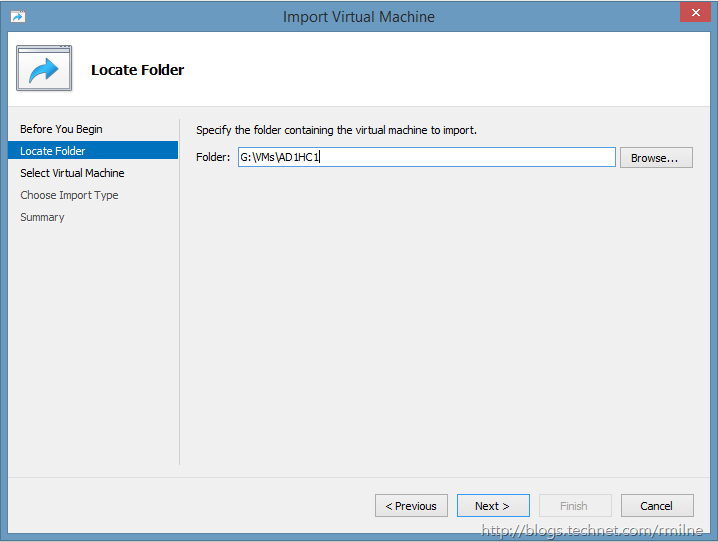 We get the following error:

Hyper-V did not find virtual machines to import from location ‘G:VMsAD1HC1’ 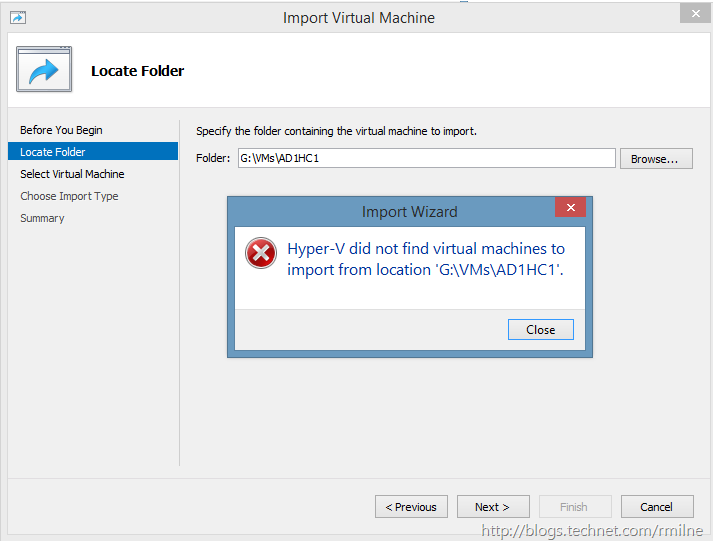 When reviewing what Process Monitor sees on the file system, there are no Access Denied error messages.  We are able to read the disk and review the files contained within. 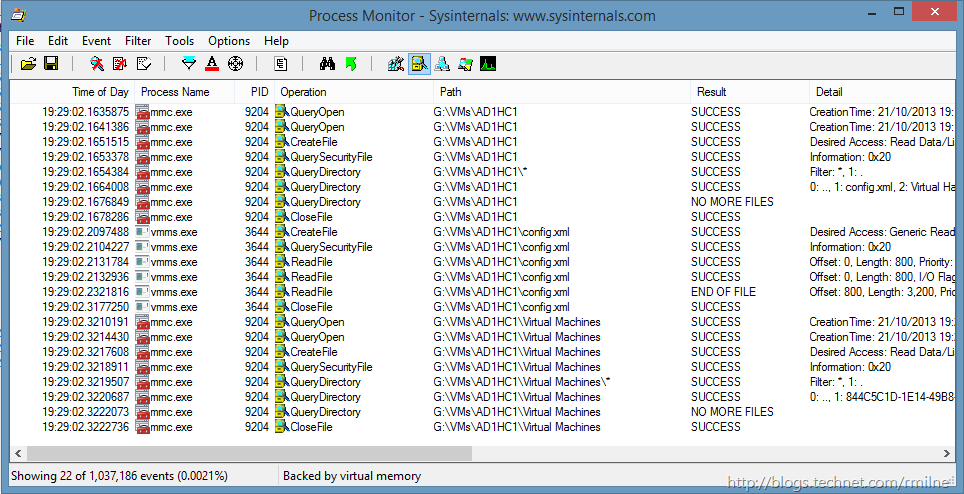 If the files exist on the disk and we can read them, what’s up then?  For the eagle eyed out there, you may be wondering why the .exp file has not been read…..

If you wrote scripts to import/export Windows Server 2008 Hyper-V VMs, there is a small clue in the Hyper-V section located in the Features Removed or Deprecated in Windows Server 2012 page on TechNet.   **

In a post on the Hyper-V TechNet forum there are some details worth reading from Taylor Brown, and if you don’t already read his blog the RSS feed is here.

Don’t panic as there are options!!  Let’s look at them based on the scenario.  There are two basic takes on this:

If you exported from Windows Server 2008 or 2008 R2, and the original host is still available with the VMs then probably the easiest option will be to get the VMs off that machine in a format that is easily importable to Hyper-V 2012 R2.

On the original Hyper-V server, power down the VMs.  Once they have shut down, then stop the Hyper-V Virtual Machine Management Service (VMMS).  This will unlock the VM’s files.  Simply copy over the VM folders to the Windows Server 2012 R2 server and they can be imported.  Remember this was one of the features added to Windows Server 2012 – we do not have to specifically export a VM before it can be imported.  Funnily enough this functionality was added in the WMI v2 namespace for Hyper-V….

If the original server or a copy of the VMs is no longer available, there are still a couple of options.  This may be the scenario if you are re-purposing the hardware and the original machine has been wiped, or if these are archived lab VMs that you are trying to import to a new version of Hyper-V.

Travis mentioned an interesting take on this in the comments below.  Consider a temporary boot to VHD option just to get the necessary import step done.  Thanks Travis!  Would love to know if that helps folks out at all – please post a comment below!

If the above method is not available, or is too time consuming, an option is to create new VM configuration and specify to use an existing virtual hard disk.  By doing so we can re-use the VM’s virtual hard disk file.  Since the virtual NIC now has a different GUID Windows will recognise it as a different NIC, and you will need to re-enter the IP address in the VM.

** – What is the etymology of the word deprecated? – and Wikipedia doesn’t count!  Personally I prefer depreciate since the original Latin dēprecātus was to pray.

*** – If you have not seen the classic BBC comedy Dad’s Army take a look!