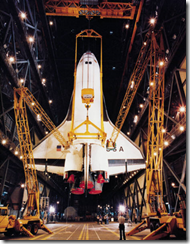 As mentioned 6 months ago, Exchange 2003 is rapidly approaching the end of its extended product lifecycle.  The ship is getting ready to launch, and hopefully this should not surprise anyone.

Exchange 2003 certainly has had a good run over the last 10 years since it was released back in back in October 2003.  It made ActiveSync available to the mainstream (Mobile Information Server was not required), implemented anti-spam measures and also introduced RPC/HTTPS which was later renamed to be Outlook Anywhere.  Do you still remember the "fun" of manually configuring the OA settings, prior to SP1, manually in the registry?

Exchange had certainly reached a point during the Exchange 2003 lifecycle which meant radical changes were required to let Exchange grow and overcome certain limitations.  Moving to x64 based architecture allowed Exchange to leverage more memory and move beyond the painful limitation of only being able to work with 4GB of memory.  PowerShell simplified the administrator's life compared to writing vbscript, and the Exchange System Manager with options buried at numerous levels was also replaced.

While we can now look back on those halcyon days, it’s almost time to say goodbye to this old friend....

Six months from today, Exchange 2003 will reach the end of it's extended support window.  Additionally other products will also cease to be supported on the same date.  Please make sure that the 8th of April 2014 is in your calendar!

The Lifecycle site’s FAQ has more information and details on support options if you are not able to complete your migration prior to the end of support dates.

Make sure that you are able to migrate to a supported product prior to the support expiration date.  Security updates will not be provided for products that are not supported.