Since we are still in the early stages of the year, and Exchange 2013 SP1 is now available, we will see lots of migrations to Exchange 2013.  Exchange 2013 can be deployed into an existing Exchange organisation where Exchange 2007 SP3 RU10 + and/or Exchange 2010 SP3 exists.

Let's look at an issue that can arise in an Outlook Anywhere co-existence scenario with Exchange 2007 and 2013.  After walking through the scenario we will see what can be done about it and review  a couple of other issues that will probably crop up, for example IIS permissions.

Update 16-6-2016: Updated PowerShell Example to use code formatting, and to also set client auth to be NTLM.

Since some customers may not already have Outlook Anywhere (OA) enabled, and are lighting it up to permit co-existence with Exchange 2013, they may run into issues if the required OS bits are not deployed on the older versions of Exchange.  You may receive EventID 2003 stating that the RPC over HTTP proxy component is not installed of is not configured correctly. Note that enabling OA on the legacy Exchange servers is not a requirement unless you want to start using OA for legacy mailboxes as well as Exchange 2013 mailboxes.

We start this scenario with a base Windows 2008 R2 SP1 Installation.  The telnet client is installed, and nothing else just to prove that the Get-WindowsFeature cmdlet is working. :

Since we are using Exchange 2007 on Windows Server 2008 R2 SP1, we will not be prompted to download and install additional hotfixes. So let’s focus on installing Exchange!

Slapping in the CD, and the splash screen launches. 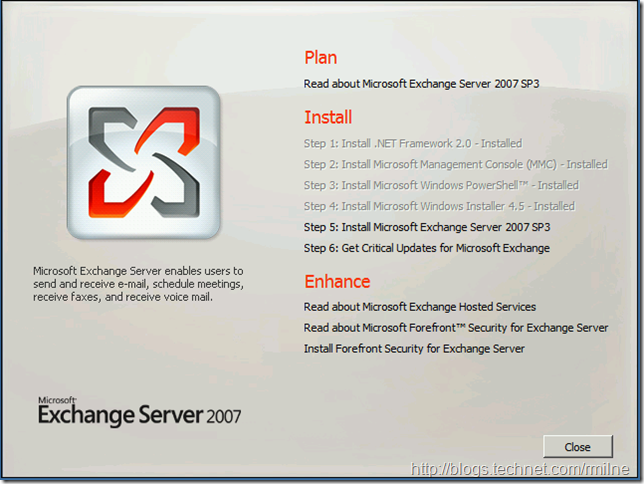 The familiar Exchange 2007 introduction screen appears, and after reading it fully we move on to the next screen: 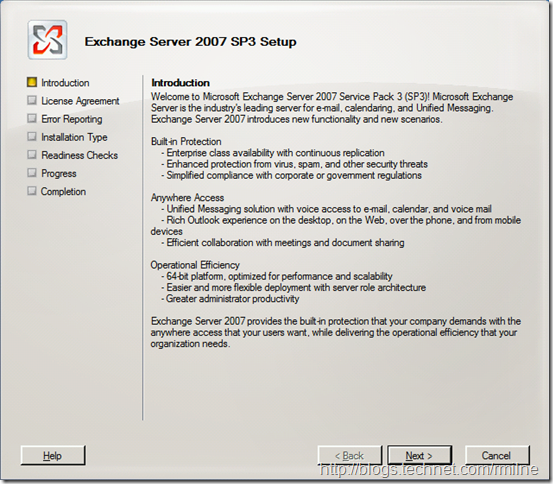 And we choose the typical installation type.  There is a reason for not splitting the roles, and we shall get to that at the end of the post!   Then we click Next. 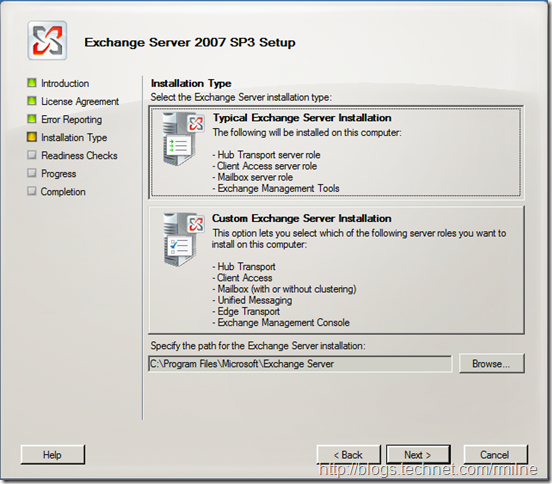 As expected since this is a base OS, the Exchange readiness check fails as we are missing IIS and other OS bits. 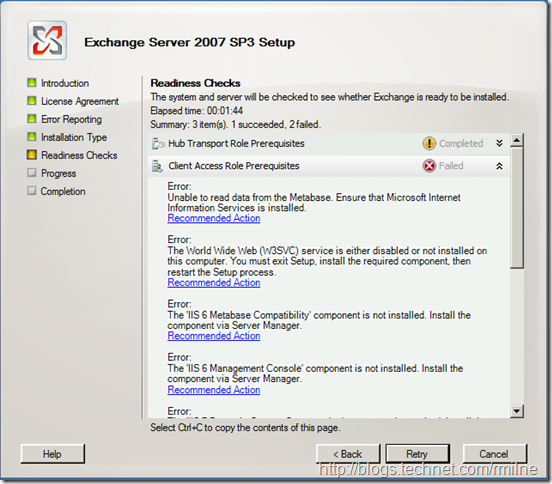 To install the missing OS bits, we can grab the pre-canned OS requirement commands from TechNet. Since we are installing a server with CAS, Mailbox and HUB these OS bits must be installed:

If the server will support Outlook Anywhere clients, install the RPC over HTTP proxy feature by running the following command:

For ease we will typically use something like the below which is one line.  Please beware that it does not wrap:

Since folks may copy the above to install a server, the command is complete and includes the RPC/HTTP proxy component.  However note that in the below example I have deliberately omitted the RPC/HTTP proxy Windows component, else our scenario will not play out!

Groovy, so we have the OS bits installed, and after a swift reboot we can then go and resume our Exchange installation.  Again choosing the same options as before, the readiness check now passes.  Green ticky-ticky all around! 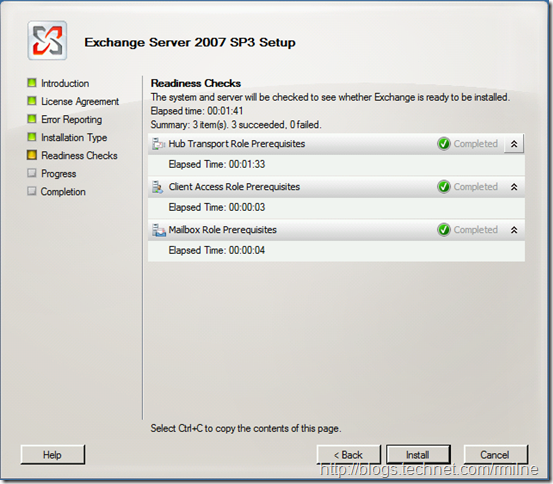 Note that the RPC/HTTP proxy component is not installed.  This can be verified by the Get-WindowsFeature output in the background. 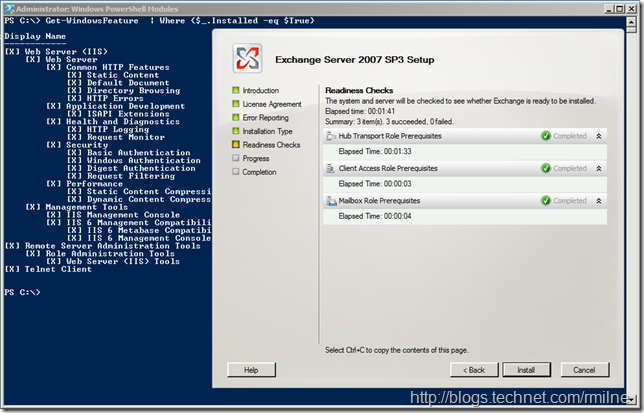 One Exchange installation completes, the server should be restarted, and the latest RU installed.  At the time of writing this was Exchange 2007 SP3 RU13.

As you saw, it is possible to install Exchange 2007 CAS role, without installing the RPC/HTTP proxy.  Let’s move on to enabling Outlook Anywhere on the server, and see what happens!

Exchange 2007 will not check that the RPC/HTTP proxy component has been installed prior to enabling Outlook Anywhere.

Thus after Exchange 2007 is installed, we can enable Outlook Anywhere on this server, even without the RPC/HTTP component being installed: 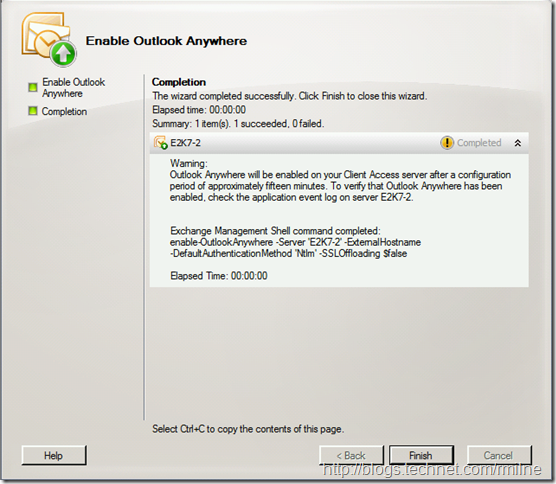 In a nutshell, it is not good!

Exchange does not have a mechanism to convert the HTTPS traffic to RPC, so Outlook Anywhere will not work at all on this server.

If you are monitoring the event logs (as you should be) Exchange does detect that something is not right. Exchange will check and realises the RPC/HTTP component is not present.  This generates the error 2003 stating that the RPC over HTTP component is not installed or is not configured correctly. 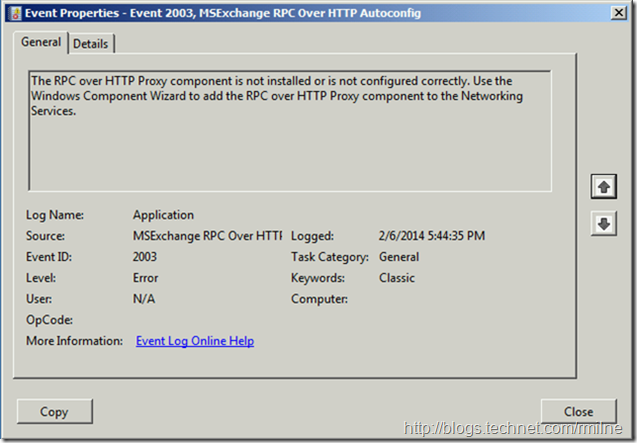 If you do open up Exchange Management Shell and look for the Outlook Anywhere settings, you will see that the Get-OutlookAnywhere cmdlet discovers that the /RPC virtual directory is not present since the RPC/HTTP component is not installed.  For details on checks (and the time taken) made to virtual directories when running cmdlets, please also see this post.

Exchange 2013 CAS will also detect that something is amiss and write an error to its application event log.  This will manifest itself as error 3005 from MSExchange Front End HTTP Proxy stating which server that it found an issue with.  There are a few variants of this, with errors ranging from 404 to other HTTP error codes depending upon the issue at hand.  In this case the error is a 404 since the RPCProxy.dll is not present. 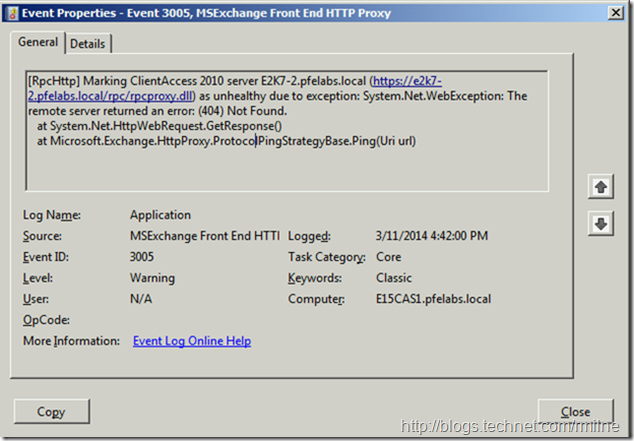 Note that the error string states that this is a Client Access 2010 server, but in fact this is an Exchange 2007 box.  Don't let that confuse you!

One other thing that you may notice for Exchange 2013’s proxy and redirection behaviour is the URL that is used to connect to legacy Exchange servers.  Exchange 2013 will build a URL to match the FQDN of the server in question.  I’ll save the details on that for a later post as it would add too much here. 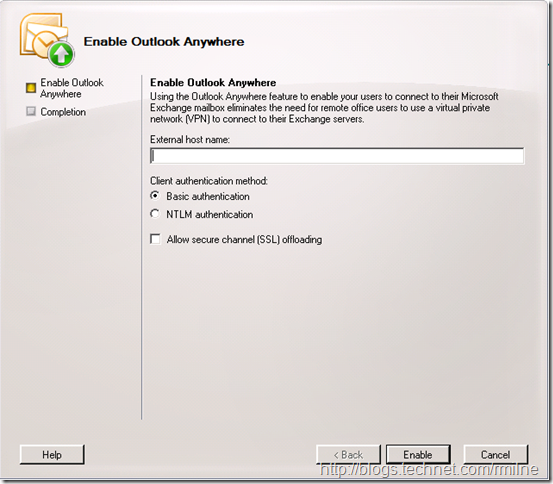 The one originally chosen when deploying those servers depended upon your design which was in turn influenced by factors like client authentication requirements and NTLM support (or rather lack of) on any device that publishes Outlook Anywhere to the Internet.

If you configured Exchange 2007 Outlook Anywhere to use Basic auth, then you will see this in PowerShell: 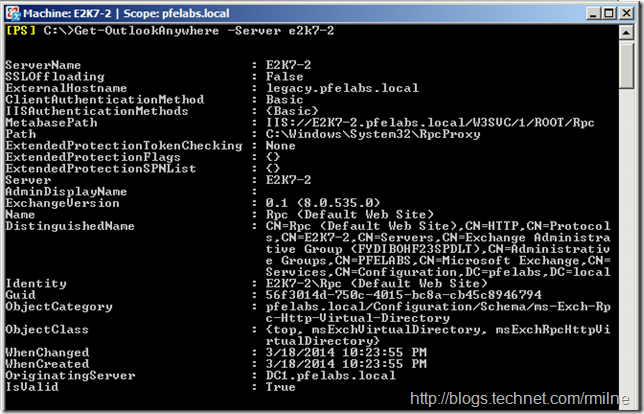 Note that this is a separate server.  This one is imaginatively called E2K7-2.  If NTLM was used: 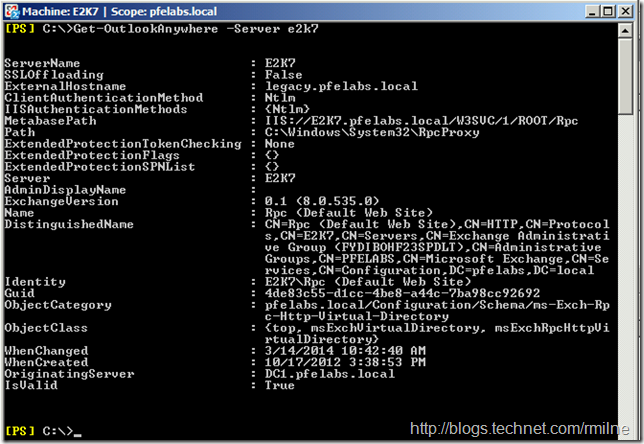 Setting multiple permissions on the IISAuthenticationMethods is probably a bit of a change compared to how we were previously configuring Outlook Anywhere.  There have also been some interesting discussions on this topic in the past.

Permissions for Outlook Anywhere coexistence were also discussed by Greg Taylor, in a style that only Gregg manages to get away with, at Tech Ready 2013 NA in session OUC-B313.   We should shoot who names these sessions…..   The video, PowerPoint and podcast for this and all the other available Exchange TechEd 2013 sessions are here.

If you have Exchange 2007 servers that have both the Mailbox and Client Access server roles installed, complete the following steps on each of those servers to disable IPv6 on them.  To do so

Note that the recommendation is not to use 0xFFFFFFFF nowadays, and 0xFF should be used instead.  Please see this post on disabling IPv6.

Alternatively, if you want to automate this, you can use something like the following.

To Set The DisabledComponents Registry Key

To Check For The DisabledComponents Registry Key

This issue is discussed in the Exchange Deployment Assistant and also KB 2794253.