MEC 2014 has now come and gone, and it's been both an exciting and tiring week!  There was always so much going on that it was a constant battle to decide what to go and see next.  But that is  a great dilemma to face.  I will be spending a lot of time in the coming weeks looking at the recordings on the IamMEC.com site.  Jon Orton just commented that the content will be release in the coming weeks for everyone.

The Keynote on Monday demonstrated the increased pace of innovation that the product group are looking to deliver.  2014 and beyond promise to bring lots of value to the service, which will then make its way to the on-premises builds.

In addition to this, there were two main thoughts that I had from watching the keynote.  Every time someone came on stage they were “excited” to talk to us, “excited” to demo something or “excited” to talk about upcoming features.  Maybe they need to use the shift + F7 feature in Word to find other synonyms….

The second was the video content produced for MEC.  The Exchange Innovation Lab video featuring Greg “CAS” Taylor, and David “TAP” Espinoza was the funniest bit of the keynote.  It may be a British thing, but I loved the deadpan delivery.

Exchange Innovation Lab
Hopefully the ‘do not reply all’ feature makes it into the product.  Maybe the other items they proposed at the end of the video will also get baked in! 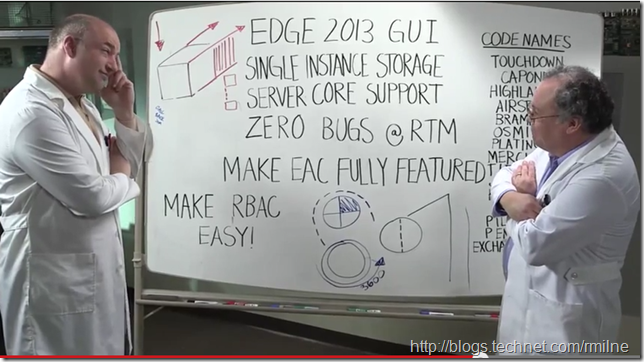 On a more serious note, announcing that OWA for Android was available, Yammer integration, and demonstrating the OWA clutter feature again showcased the continued value Microsoft is delivering.  As others have already commented in the blogosphere, the move to make OWA the rich client and ActiveSync the reach client is an interesting choice.  With this change, Microsoft is better able to control the user experience on a multitude of devices.  This allows for a very consistent user experience no matter which device you are using!  It also allows for easier updates since Microsoft can apply Exchange server updates to the service, or the admin in an on-prem scenario, and the end user experience is updated.  Of course the recent release of Office for iPad was heavily discussed by the attendees.  As a matter of fact I saw several people using OneNote for iPad to take notes during the sessions.

The Dell Venue pro giveaway for the attendees was also a great way to finish off the keynote, and I’m now very glad I didn’t buy one at Christmas!    In addition to the device, there was also a O365 subscription and a 64GB high speed micro SD card.  Tough decision what I carry around now.  Will it be my Surface, or the Venue?

The exhibition floor was packed with a multitude of vendors who were eager to showcase their solutions to customers.  Customers were also able to pick up some really neat giveaways.  To the right you can see the closest that I got to a booth babe!

This is my colleague Wes modelling one of the giveaways.  You will notice the RaaS booth in the background since Wes is one of the global leads for Exchange Risk Assessment As A Service (RaaS).  For more  information on RaaS please take a look at this page.

One other area that was cool to walk around was the Exchange exhibition.  Not only did the team produce a video to discuss the history of Exchange since it was born back in 1996.  You can see the Exchange through the ages video below:

Exchange Through The Ages

There were previous Exchange books, and for a real trip down memory lane the Exchange installation media.  That’s right kids, when stuff came on CDs and floppys….. 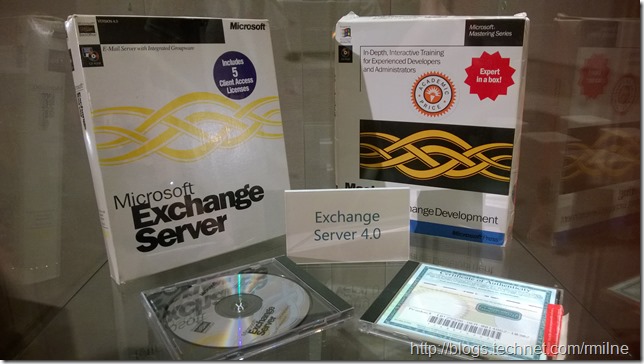 This reminds me that I need to look at that blog post for Exchange 2013 as discussed with the MVPs!

While the above were all really great technical things to look at the biggest aspect of MEC is connecting with the people who make up the Exchange community!  While this means that countless free bottles of beer have to be consumed whilst talking to people, it was a hard task and I grudgingly stepped up to it!

I was fortunate to connect with many of the Exchange product group.  These folks are ridiculously busy.  So any time they take to meet with attendees is great.  I also got to see many of the Exchange MVPs who I see online in the forums which was fantastic, even though one has a crippling nurse fetish.  Though after the keynote, that may have been corrected…  Many Microsoft PFEs and consultants were also attending MEC and it was outstanding to chat with all of them.

The UC Architects party was great!  Since they also closed out MEC with a live recording of the latest podcast, I’ll look forward to seeing the more edited version!

Austin is certainly a great place, and I have some very happy memories from both it and MEC.  I must comment on the public transportation system however.  It does seem to be somewhat antiquated, and brings back memories of Fred Flintstone’s troglodyte transport… 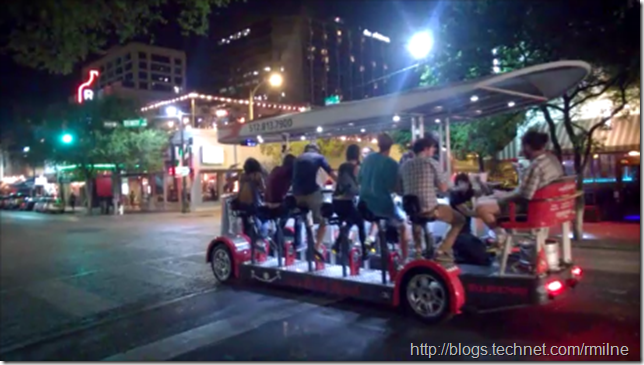 I can only describe this as a “beer bus”.  The passengers are sitting perpendicular to the direction of travel, and have to pedal to make the vehicle move.  if you look closely at the rear of the “bus” you will see the advanced propulsion fuel container.  A keg……