Exchange 2013 CU8 has been released to the Microsoft download centre!  Exchange 2013 has a different servicing strategy than Exchange 2007/2010 and utilises Cumulative Updates (CUs) rather than the Rollup Updates (RU/UR) which were used previously.    CUs are a complete installation of Exchange 2013 and can be used to install a fresh server or to update a previously installed one.  Exchange 2013 SP1 was in effect CU4, and CU8 is the fourth post SP1 release.  CU8 contains AD DS schema changes so please test and plan accordingly! 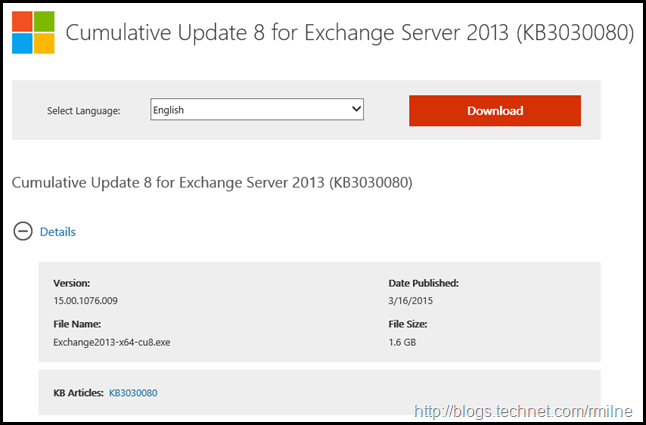 In terms of increasing modern Public Folder throughput, CU8 has again increased the limits.  CU7 previously provided support for Public Folder Hierarchies in Exchange Server 2013 which contain 250,000 public folders.  These limits have been greatly increased with CU8.  Note though that there are differences in the amount of Public Folders that can be migrated, compared to the number that are supported once public folders are on Exchange 2013.

ActiveSync devices can now be automatically reconfigured when moving to Office 365 as long as the client supports HTTP 451 redirects.

As with previous CUs, CU8 follows the new servicing paradigm which was previously discussed on the blog.  The CU8 package can be used to perform a new installation, or to upgrade an existing Exchange Server 2013 installation to CU8.  You do not need to install Cumulative Update 1 or 2 for Exchange Server 2013 when you are installing CU8.  Cumulative Updates are well, cumulative.  What else can I say…