In the March 2015 security bulletin, update 15-027 was released.  This is to address a vulnerability in the Netlogon component of windows that could allow spoofing.  The security bulleting for 015-027 is available in the Security TechCenter.  KB 3002657 provides details of the update.

Please be aware that the update has been revised, and version 2.0 is now available.  Version 2 is required on Windows Server 2003 machines to correct the issues discussed in this blog post.

This is discussed in the revisions section of the security bulletin.

If you are planning to patch servers in the coming days, please verify what is being rolled out and the version of the update(s).

There have been reports of the original version of the update (v1.0) affecting Exchange and Outlook if Windows 2003 domain controllers are still present in the environment. The typical client symptom is authentication prompts when using NTLM authentication.  EventID 4625 will be logged stating An Error occured during Logon with a status code of 0xc000006d.

The revised update can be downloaded from the Microsoft download center.

Links to all versions: 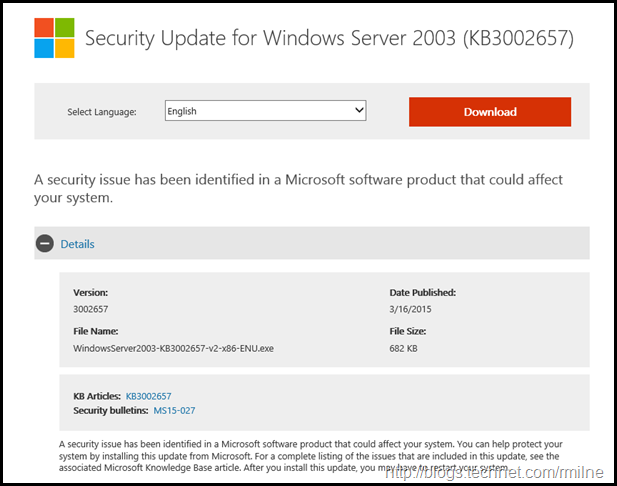