Now that Exchange 2016 has been released, let’s take a look at the Exchange 2016 installation process.  We will see that there are some similarities compared to Exchange 2013 along with some differences.

Exchange 2016 can be downloaded from here.

As with every project proper, planning and preparation is required.  Deploying Exchange is no different.  TechNet has an overview of the steps that are required:

The lab is based on Windows Server 2012 R2 servers for both Exchange and Domain Controllers.  No prior versions of Exchange have been installed into the lab, and Exchange 2016 will be deployed from scratch.   The domain name is contoso.com and we will deploy Exchange 2016 using the graphical installer and also the command line.  The Exchange organization will be called “Contoso”.

As with many customer environments, the Exchange team will not be the ones who will update the AD schema and prepare AD for the installation of Exchange.  To that end the AD preparation steps will be performed directly on the schema master, not an Exchange server.

To prep AD for Exchange 2016, .NET framework 4.5.2 must be installed onto the machine that will be used to prepare AD.   Follow these steps to verify the installed version of the .NET Framework.  If required, install .NET 4.5.2 and restart the machine. 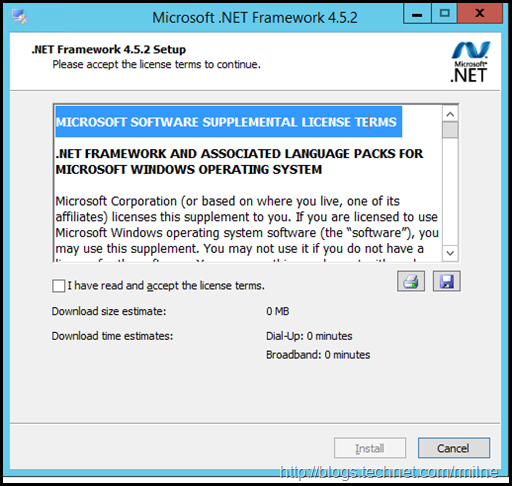 As with prior releases, we need to first extend the AD DS Schema, PrepareAD and finally PrepareDomains.

Note that the setup file is setup.exe for both wizard and command line tasks. You may remember setup.com which was last used with Exchange 2010 unattended setup.  It is also noteworthy that the full syntax has been specified, note that the shortcut syntax such as setup.exe /PS is not used.  This was covered in the 6 Mistakes To Avoid With Exchange 2013 CU Command Line Installations.  There are now 7 mistakes listed in the article, but if the title was changed links would break.

Then we will run PrepareAD: 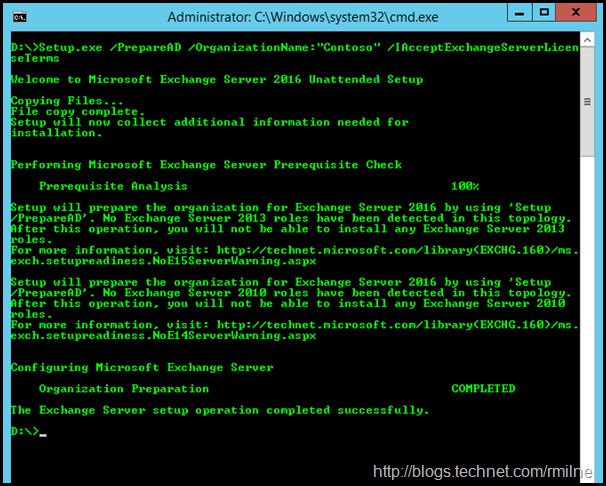 At this point we cannot add any Exchange 2010 or Exchange 2013 servers since Exchange 2016 PrepareAD was executed, and there were no prior Exchange servers.  This is covered in the post Exchange Upgrades–The Point Of No Return.

Finally we need to prepare the domain.  There is a single domain in this forest – contoso.com.

Now that AD has been successfully prepared, we can move to preparing the Exchange 2016 servers themselves.  Allow time for AD to replicate before attempting to install the first Exchange server.

Prior to installing Exchange 2016, prerequisites need to be installed onto the underlying OS.  While it is possible to use the /InstallWindowsComponents that does not install the other components that are not in-box.

To install the required Windows Server 2012 R2 OS components run the below from PowerShell:

Note that –Restart has been added to automatically restart the server.

Once the server restarts, then we need to install: 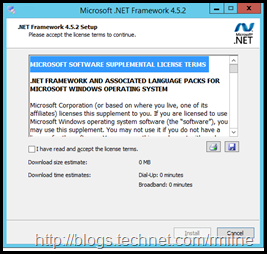 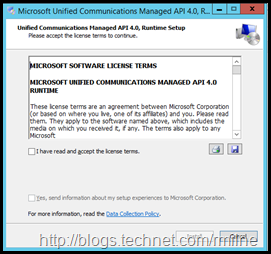 Start the Exchange 2016 setup.exe using an elevated prompt if UAC is enabled, though it is a good habit to always elevate so it is not missed. 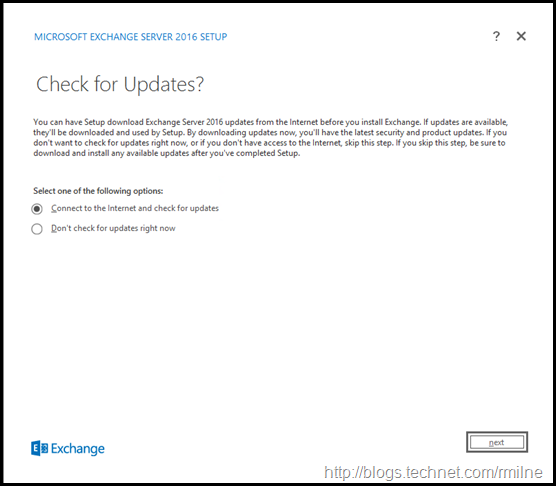 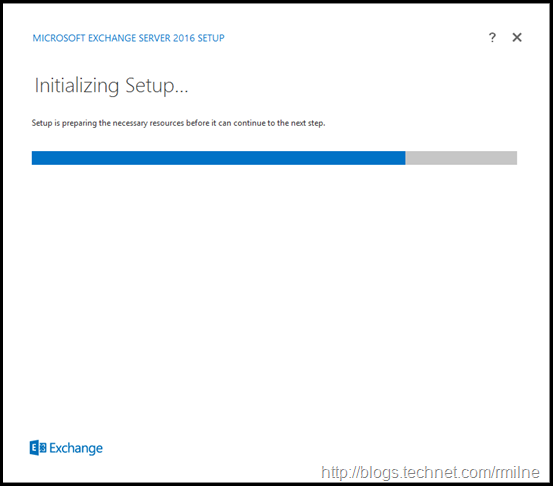 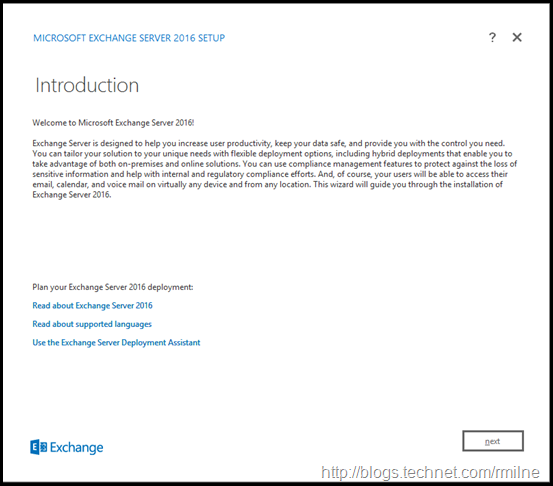 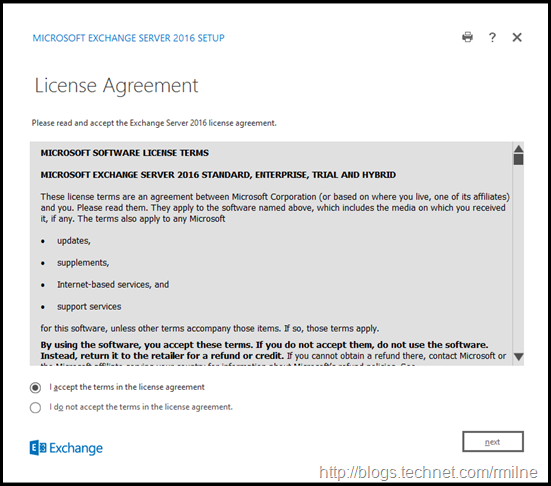 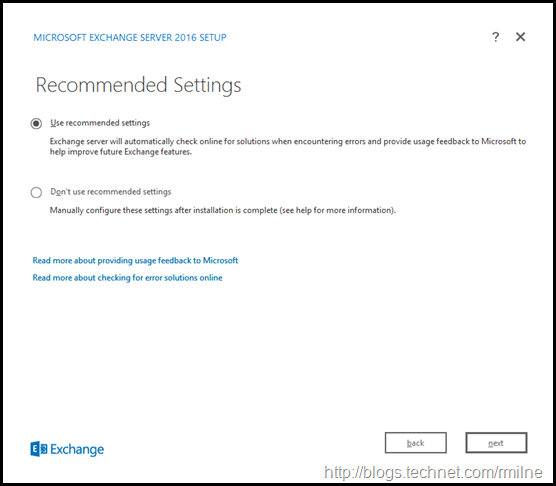 The prior screens have been similar to Exchange 2013, and now we see a major difference.  There is now a single Exchange 2016 role that combines both the CAS and Mailbox roles from Exchange 2013.  Multirole installation was the recommendation for the last two Exchange releases and is the basis of the Exchange Preferred Architecture. 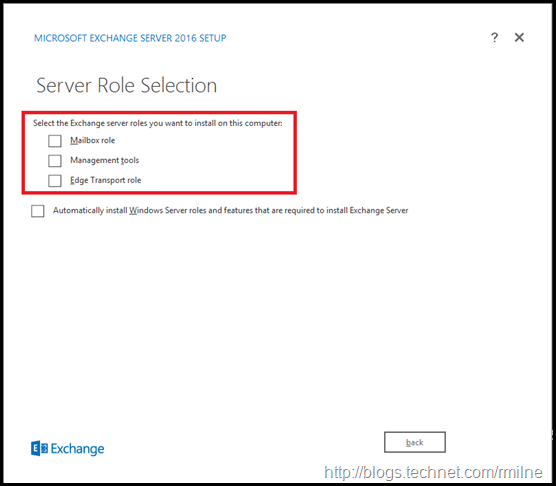 In Exchange 2016 the default installation path remains the same as Exchange 2013, this is C:Program FilesMicrosoftExchange ServerV15

Note that Exchange 2013 and 2016 will consume considerably more space in the install folder compared to Exchange 2007/2010.  Plan accordingly.  Creating a 50GB C: drive and installing Exchange 2016 to the default location will not end well. 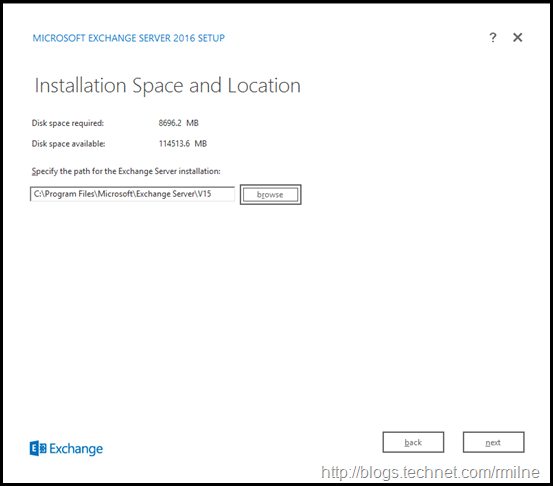 Exchange 2016 has malware scanning enabled by default.  This can be disabled at installation time if you plan to use a 3rd party product instead. 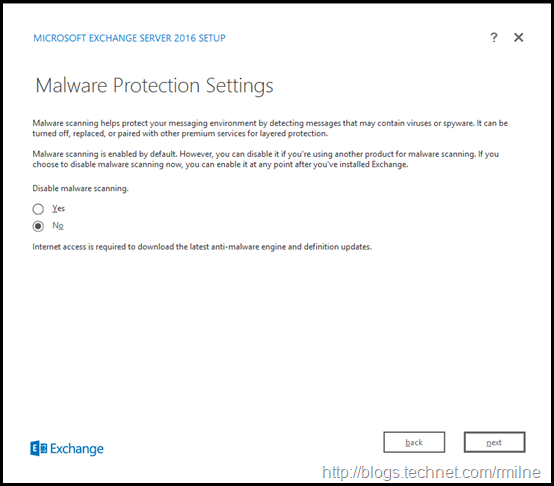 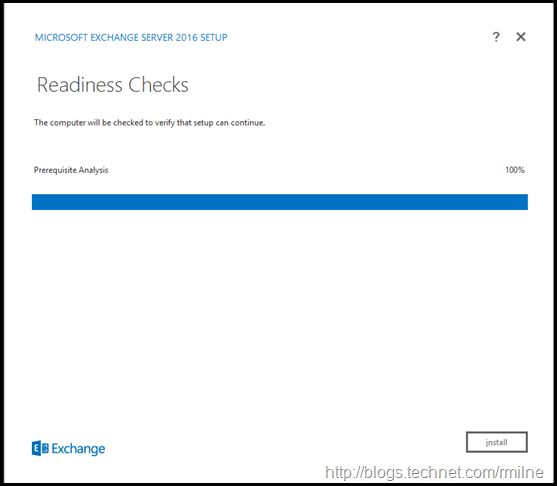 Exchange 2016 will then be installed. 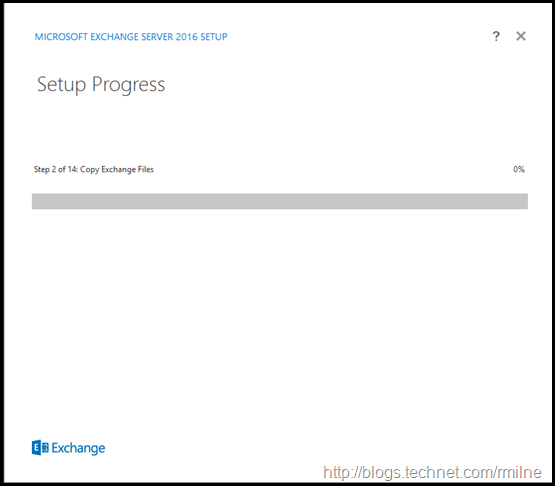 Note that setup requests the server be restarted to complete the installation process. 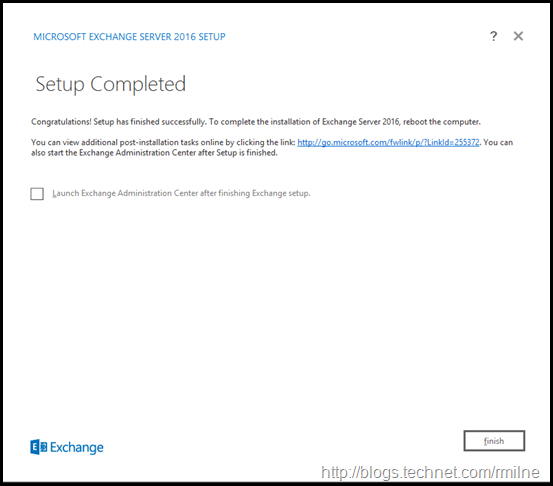 To complete the install, restart the server.

The sever below has all of the above already installed, so we can focus upon the command line installation aspects in this section.

Since AD was already prepared with the Exchange organization name it is not specified in the command below.  For all of the Exchange 2016 setup switches, please review TechNet.

As noted above, an elevated command prompt is used to initiate the install: 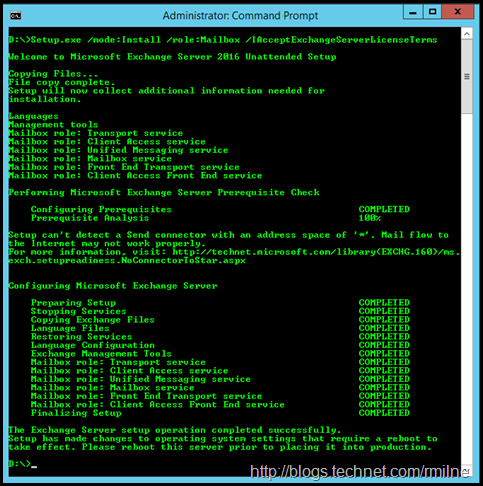 Again once setup completes the server must be restarted.

In the below screenshot, we can see the two lab servers:

Exchange 2016 may be installed, but there are many tasks remaining.  The various URLs for the web services on the server must be configured.  This must match the CAS namespace design for your Exchange deployment.

For example the below screenshot shows the default Exchange 2016 configuration for the OWA virtual directories.  Typically they will require modification.

Do not leave the default self signed certificates bound to the various services.  Proper PKI issued certificates should be immediately installed and configured. It is recommended that Exchange be installed into a dedicated AD site so that users in the production AD sites do not try to leverage the services of the new server prior to the correct CAS namespaces and certificates being configured.  In this case, remember to change the Autodiscover Site Scope coverage to reflect the correct AD site.  This must be done manually.

The same applies for mail flow as well, other servers will see the server as available for mail flow and may start to use it.  Depending upon your environment this may cause issues.