The Client Access Server (CAS) role in Exchange 2013/2016 will proxy or redirect the incoming user’s connection to the correct place depending upon the topology of the environment and version of Exchange their mailbox is on.  This leads to an interesting discussion point when it comes to managing the connections to down-level versions of Exchange.

Initially the Exchange 2010 organization would have looked something like this from a networking perspective. 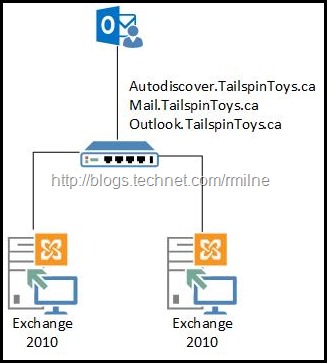 After following the Exchange Deployment Assistant guidance when migrating to Exchange 2013, the networking flow would be adjusted to something similar to the below.  Note that the same will apply for Exchange 2016 also doing the down level proxy to Exchange 2010

The HTTP protocols have all been moved over to Exchange 2013.  This means that Exchange 2013 is the client contact point for OWA, EAC, EAS, EWS, OAB and Autodiscover.  Since there is no Outlook RPC endpoint in Exchange 2013, clients must connect to Exchange 2013 using Outlook Anywhere or MAPI/HTTP.  For mailboxes still on Exchange 2010, CAS 2013 is unable to proxy RPC requests, since it does not listen for those requests and Outlook needs to connect to the existing RPC endpoint on Exchange 2010 CAS.  This is why the Outlook.TailspinToys.ca namespace must remain and point to CAS 2010.  Until the 2010 mailbox is migrated, the Outlook client will connect to CAS 2013 for HTTP requests and to CAS 2010 for RPC Client Access.  The RPC Client Access is indicated by the purple line above.

Now that we have the background, to the question of how do we control access to the  Exchange 2010 servers in this mixed environment.

We can break this down into two main sections:

Since the proxy target is the sever FQDN, the traffic is not using the load balancer.  Thus servers are NOT removed from serving HTTP requests by marking them down on the load balancer (as we can with RPC Client Access).  In order to ensure that the proxy target is functioning,  Exchange 2013/2016 Managed Availability will test the health of Exchange 2010 servers and react accordingly.  So if we want to tell Exchange 2016 that it should not use a particular Exchange 2010 server as a HTTP target, how do we do that?

The default setting is for the IsOutOfService flag to be $False which meas the Exchange 2010 server will accept the proxied traffic.

The below shows an excerpt from an Exchange 2010 server's IIS log.  You can see the entries here for the HttpPing. 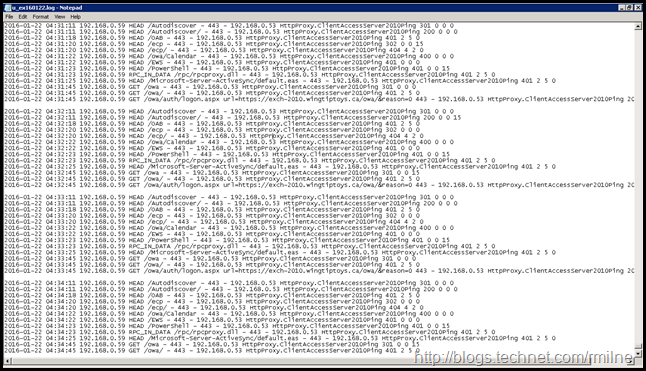 One thing to note is that the expected behaviour is not that all entries will have a 200 HTTP success code.  As long as 2013/2016 CAS receives a 200/300/400 response, that service is considered valid for traffic.