Do not perform an in-place upgrade to the OS on your Exchange servers.  Over the years there have been issues and lots of posts in the TechNet forums where people have run into some challenges when they have upgraded the OS in place to a new version Windows Server.  Unfortunately there is not much that can be done to help as this is not a supported solution at this time.

TechNet documents the Exchange Product Group’s supported OS for each version of Exchange.  Here are the links for your convenience:

Note that the supportability matrix has been condensed into a single page that includes all versions.

TechNet documents the below at the time of writing (December 2016) as supported Operating Systems for Exchange.  Note that only Exchange 2016 CU3 onwards is supported to be installed onto Windows Server 2016. 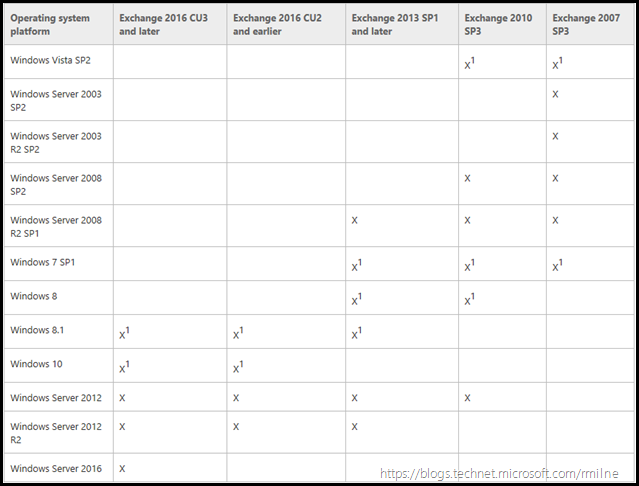 To reinforce the point of using only what is explicitly stated in the table, there is an additional note that the client OS are only supported for management tool installation.  For Windows 10, only Exchange 2016 management tools are supported. 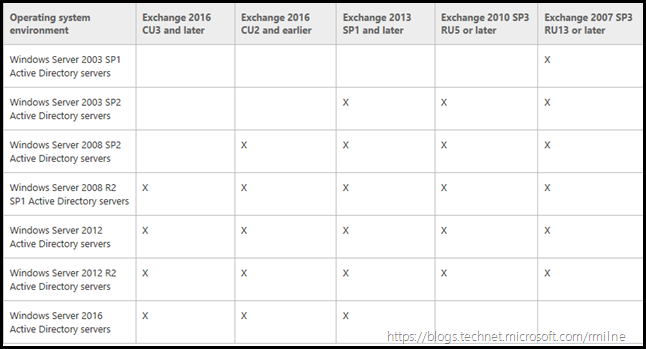 I didn’t list Exchange 2003 as hopefully no one out there is going to be trying that on Windows Server 2016. *

Update 14-12-2016 Updated article to reflect the current support position, and to also include references to the required update when Exchange 2016 is installed onto Windows Server 2016.  The previous version of this post will not be preserved as it contains now out-dated information that was only of relevance when Exchange was not supporting installation onto Windows Server 2016.

* – Bonus points though if you still can find the CDs!