This is a tale of when a “quick” review of CAS namespaces quickly went off at a tangent.  When working with the messaging administrator, let’s call him “Mike” to protect the innocent, he showed me the below for his Exchange 2013 server.  He was quite happy with the config, but that bubble was about to be popped.  Note that the ShowMailboxVirtualDirectories parameter has been added to allow us to see the URLs set on both web sites.

Mike "the innocent” administrator was surprised to learn that changes had been made.  To illustrate the differences, the below image is from one of my reference Exchange 2013 systems.  Note that:

For easy comparison the InternalNLBBypassURLs are laid out below:

For reasons unknown to “Mike” the back end InternalNLBBypassURL was changed.  The correct format is for it to be the server FQDN, targeting port 444 TCP.  How it was changed was also unknown.

Let’s start with the easy task.  The InternalNLBBypassURL should be empty on the Exchange 2013/2016 CAS default website.  The value will be set to $Null.

Good.  Now to move onto the next task, correcting InternalNLBBypassURL  for the back end website.

In order to correct the back end issue, the exact identity of the website and virtual directory is required.  We can get that with:

The identities are shown for reference below, the backend is highlighted as that will be used.

Since I normally hate having to type all of that, I typically use –Server to specify the server when working with virtual directories, but that falls down when the task requires more precision.  That is the case here, and we need to target a specific virtual directory.

So far so easy.  Let’s just set that badboy, and we are done.

KB 2778897 -- Cannot access Outlook on the Web or the EAC after you re-create the "owa" or "ECP" virtual directory on an Exchange Server Mailbox server describes a similar issue where the workaround is to directly load the Exchange PSSnapIn.

As discussed in Directly Loading Exchange 2010 or 2013 SnapIn Is Not Supported directly loading the Exchange PowerShell SnapIn is only to be done in specific circumstances.  This blog post does not claim the process below  is supported.  Contact Microsoft support for guidance before proceeding. 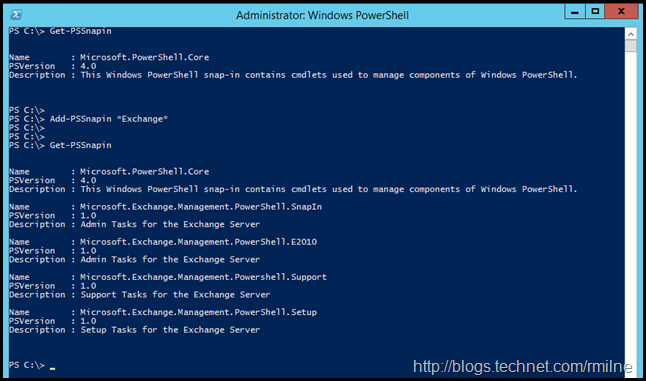 In Windows PowerShell the same command as above was executed:

Windows PowerShell is then closed, and normal management is resumed in the Exchange Management Shell.

The server now has the the configuration updated on both the default and back end websites.

Note: updated to correct the NLBBypassURL to match the correct server name.

Update 26-7-2016:  There is a known issue corrected in Exchange 2016 CU2 which will also cause a server which has been recovered to have an incorrect EWS URL.  This is covered in KB 3128167  "HTTP status 404” error when you access free-busy information for mailboxes on a recently recovered Exchange Server 2013 Mailbox server.   Thanks to Paul Cunningham for the note!