The other issue which happens is that they are very often overlooked in subsequent migrations.  For various reasons arbitration mailboxes are not moved when they should.  The below is an example of what I often discover.  Note there are two versions of Exchange in this lab: 2010 SP3 RU15 and 2013 CU13.

The CAS namespaces have all been cut over and mailboxes moved to Exchange 2013.

PowerShell was used to see the arbitration mailboxes.  Specifically we need the –Arbitration parameter in Get-Mailbox.

If we look to see which version of Exchange hosts the arbitration mailboxes, note that there are two versions .  Only the bottom two ones, which are highlighted are on an Exchange 2013 server.  All of the others are still on Exchange 2010.  We can tell by looking at the mailbox’s AdminDisplayVersion, which is the version of Exchange they are located on. 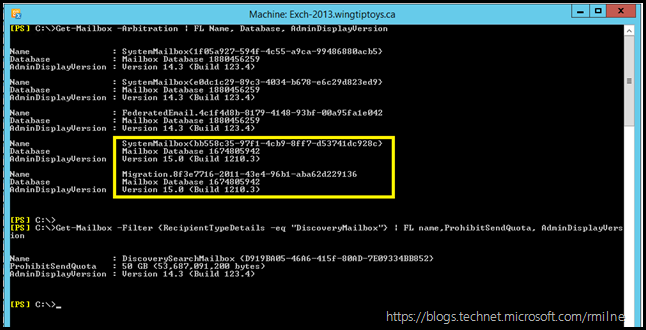 Why are arbitration and system mailboxes on two different Exchange Versions?

For a more detailed post on where the arbitration mailboxes were first introduced by a particular version of Exchange please see Arbitration Mailboxes – Lay of The Land.

Custom greetings, announcements, menus, and prompts are used by Unified Messaging dial plans and auto attendants. The system mailbox named {e0dc1c29-89c3-4034-b678-e6c29d823ed9} is created when you install Exchange 2010, 2013 or 2016 and is used to support features such as Message Approval and Multi-Mailbox Search. This system mailbox is also used to store dial plan and auto attendant custom greetings, announcements, menus, and prompts.  This is discussed in Upgrade Exchange 2010 UM to Exchange 2013 UM.

This screenshot is from an Exchange 2010 only environment, note the three arbitration mailboxes and the one DiscoverySearchMailbox.  The names match with the four mailboxes listed above.

For make benefit, most glorious search engines the pertinent persisted capabilities data is added below:

The above discussion unpacks the history and reason why arbitration mailboxes are often found in the above situation.  However this should not be the case.

If you fail to do this simple step, then big issues are heading your way.  They include:

This is from Re-create the Discovery system mailbox

In case additional arbitration mailboxes were created, you may need to then also discover who is configured to leverage the non-default ones.

This is from Manage and troubleshoot message approval