Exchange 2013 CU15 has been released to the Microsoft download centre!  Exchange 2013 has a different servicing strategy than Exchange 2007/2010 and utilises Cumulative Updates (CUs) rather than the Rollup Updates (RU/UR) which were used previously.    CUs are a complete installation of Exchange 2013 and can be used to install a fresh server or to update a previously installed one.  Exchange 2013 SP1 was in effect CU4, and CU15 is the eleventh post SP1 release.  How time flies….. 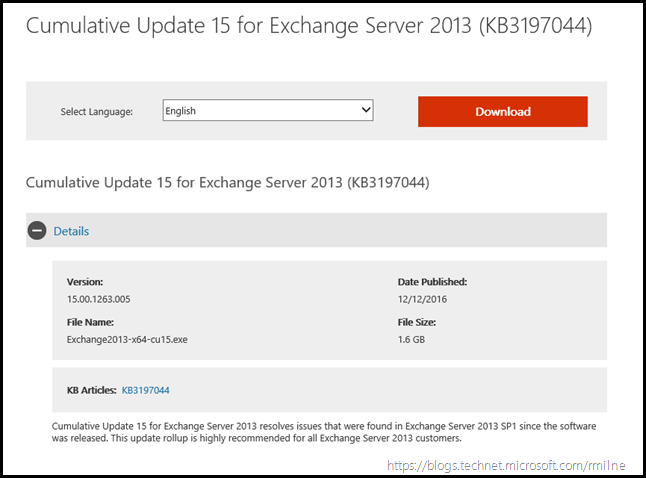 Whether or not your AD Schema needs to be updated depends upon your initial Exchange 2013 version.  This will dictate if the AD Schema needs to be modified.  Check the values as noted in this post.  There may be additional RBAC definitions, so PrepareAD should be executed prior to installing CU15.  If setup detects that PrepareAD is required it will be automatically executed if the account running setup has the necessary permissions.  This was an issue first discussed in the MessageCopyForSentAsEnabled  post.

The fix for the recent public folder indexing issues is included with CU15.  This was an issue introduced in both Exchange 2013 CU14 and Exchange 2016 CU3.  This is discussed in KB 3202691 - Public folders indexing doesn't work correctly after you apply latest cumulative updates for Exchange Server.  Note After you install this update on either version of Exchange Server, you should move the public folder mailbox to a new database to make sure that all items are indexed correctly.

CU15 supports .NET framework 4.6.2 – while this is an optional upgrade at this time, it makes sense to plan the .NET upgrade as it will become a required pre-requisite for the next CU.

On net-new installs the Desktop Experience feature is no longer required, since Windows has refactored how the components are installed in the newer versions of Windows.  This allows net-new installs of Exchange 2013 CU15 and Exchange 2016 CU4 to install less components than before as only the Media Foundation feature will be installed when using the /InstallWindowsComponents setup switch.  Since this is for net-new installs, upgrades to existing servers using either of the two aforementioned CUs will not change the installed OS components.  If you desire, you can add Media Foundation and remove the desktop experience after installing these CUs. This is optional.

KB 3198046 FIX: The UM mailbox policy is not honored when UM call answering rules setting is set to False in an Exchange Server 2013 environment

KB 3209041 FIX: An ActiveSync device becomes unresponsive until the sync process is complete in an Exchange Server environment

KB 3209013 FIX: The LegacyDN of a user is displayed incorrectly in the From field in the Sent Items folder on an ActiveSync device