This is a repro of a customer reported issue where they were having issues sending email from Office 365 to on-premises Exchange servers.  Apparently this had been working previously with no issues, then mailflow started to have problems.  Some email was flowing from Office 365, but some was delayed or not delivered at all.

There were no issues sending email from the on-premises Exchange servers to Office 365.  The issue was the mail flow from cloud to on-premises.

Reviewing the Queues in Office 365 is also straightforward.  In the below example note that the focus is on the Mail Flow, and then message trace.  There are pre-canned queries to search emails from the last 24 or 48 hours.  This can also be customised to suit the specific requirement.  This was sufficient to troubleshoot this issue.  For more complex situations please review Andrew’s excellent EOP blog, specifically the Parsing an extended message trace post. 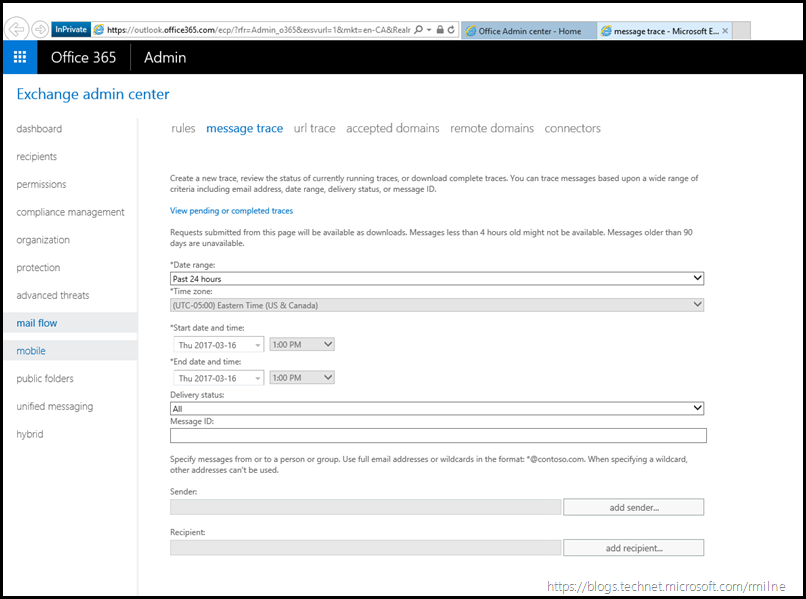 After entering the relevant time slot, and expected recipient the trace was executed.  Multiple messages were then seen in the queue.

Taking one message as example, we can see that the message delivery to on-premises failed and that a specific error code  of 4.4.316 was reported.  We can see this by clicking to expand the entry using the arrow on the left hand side of the Message Events table. 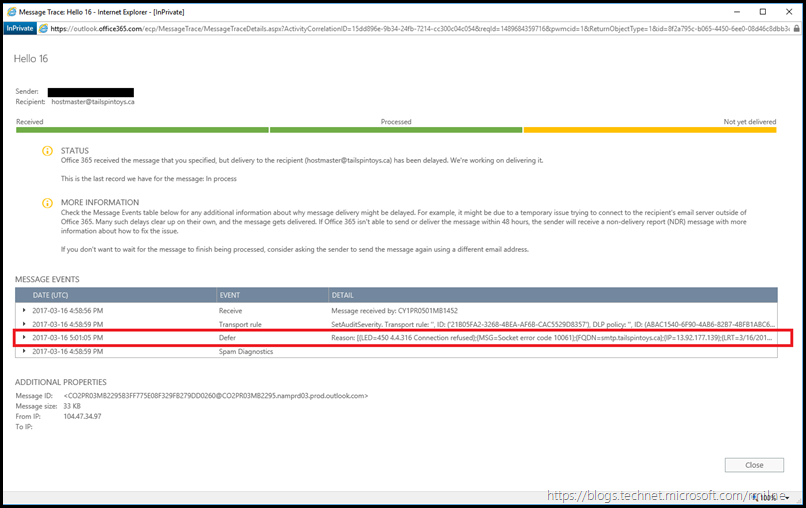 If we drill into the Message Events table, and expand the Defer event entry we can see the below details:

The reported error was:

As always, start with the simple things.  The IP address of 13.92.177.139 is correct and does point to the on-premises Exchange servers.  This was validated using nslookup.   We can see the name which was used by Office 365 in the Message Event details - smtp.tailspintoys.ca.  This resolves to the external IP of the on-premises environment.  Since email is encrypted between Office 365 and on-premises Exchange we also need to verify the certificate used by the encrypted SMTP connection to ensure that it is valid.

Reviewing the certificate bound to the SMTP service we can see that the name on the certificate is also correct – mail.tailspintoys.ca.  Also we ensure that the certificate is within the validity period, has a private key and chains correctly to the issuing CA.  We can check the chaining on the Certification Path tab.  Some CA vendors have their own tools to assist with this validation process.  Check with the CA vendor which issued your certificate. 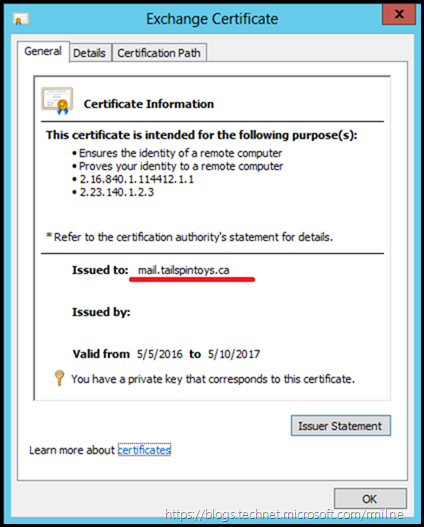 What is logged in the Exchange Receive Connector logs?  We need to review this to ensure that the Office 365 traffic is being processed by the correct receive connector.  It is recommended that you enable the SMTP send and receive logging on all Exchange servers so that log data is available to troubleshoot an issue.  Else you then need to enable the logging and wait for the issue to re-occur.  The logs will be located under the Exchange installation folder, which is slightly different between Exchange 2010 and 2013/2016.

We can take the sending IP address from the Message Events and then search for it in the SmtpReceive log.  In the example the IP we wish to search for is 104.47.34.97.  The IP is shown below so you can see where it was obtained.

There were no connections from this IP address on any of the Exchange logs.  This means that the traffic was not getting to Exchange.

Now that we have done our due diligence and validation, time to speak to the firewall administrators.

Microsoft documents the IP addresses and URLs which are required to access the various components of Office 365.  The addresses and IPs are often modified, and you can subscribe to the RSS feed to be notified of changes. 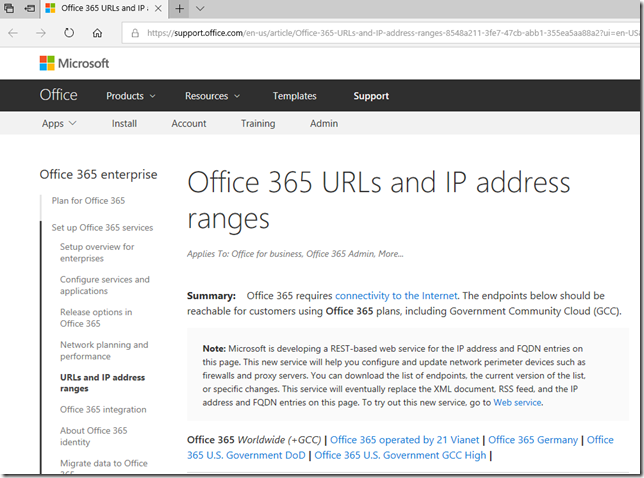 In this case the customer did not update the firewall correctly when they made a recent change to their external firewall ACLs.  For some reason they removed some of the EOP IP objects from the ACL.  As a result only some of the EOP servers were allowed to communicate with the on-premises SMTP endpoint.

Once the firewall objects had been corrected, all email was then delivered without further issue.