It’s time that we revisited the implementation of Autodiscover in current builds of Outlook, as there have been some changes that are worth noting.

The latest public article which discusses Outlook and Autodiscover is: Outlook 2016 implementation of Autodiscover.

You can take a look at the previous posts on the blog which feature the #Autodiscover tag.  They show the “classic” Outlook 2007 implementation and how that slightly evolved in Outlook 2010 and then into Outlook 2013.

Some of the relevant articles:

How To Read Exchange Autodiscover Response In Outlook

Domain joined Outlook 2007 clients with line of sight to a DC would query for the SCP object.  Only if that fails, would it them fall back to the DNS chase down used by non-domain joined clients.

The “classic” non-domain joined Outlook 2007 lookup process would be:

Even the Outlook 2007 implementation changed, as the ability to use SRV records was not there at RTM, that was added via updates.

These posts outline how we went from the synchronous model first introduced with Outlook 2007, as shown in the diagram below, to the more asynchronous Outlook 2013 implementation where it would go and do the DNS chase down at the same time as looking up the SCP.

That led to some unfortunate issues if the domain controller had a HTTPS binding on TCP 443.  Outlook 2013 would expect to see a certificate which had the domain namespace.  If it did not, then one symptom would be certificate pop-up error.  Other issues would be increased load on the domain’s website that was now having to deal with the additional requests for Autodiscover.xml files.  That on it’s own would not be terrible; unless you have a series of web apps that then tried to process the request and got sent into a death spiral due to being unable to understand what they were meant to do with this strange Autodiscover thing.  SharePoint was also impacted if that was responsible for the domain level website.
The Outlook client would generate an error such as this example, where the client asking a non-Exchange server for Autodiscover information. 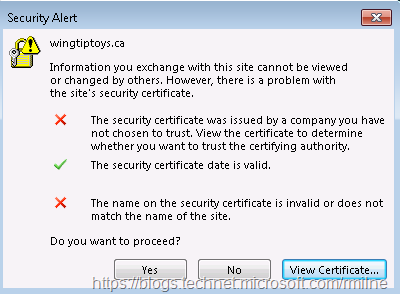 So there is a history of Autodiscover changing and evolving over time, so what is updated with Outlook 2016?

The ability to use Last Known Good (LKG) was added and backported to Outlook 2010 during its life cycle.    Additionally the locally cached XML files can also be referenced.   The AutoDetect feature from the Accompli mail app (now Outlook for iOS and Android) added a cloud check element.

With all of these changes we now end up an evolved Outlook 2016 model compared to the above.