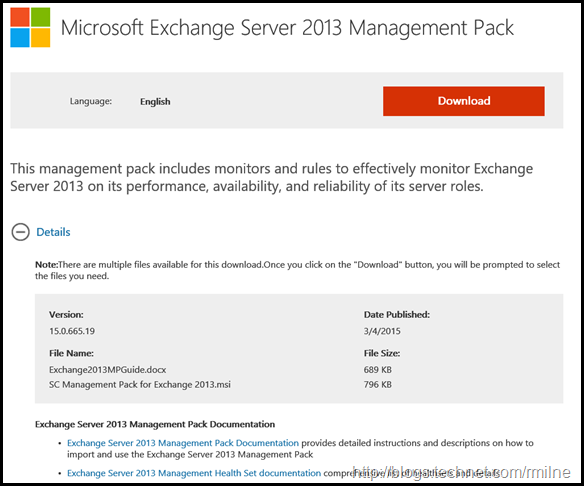 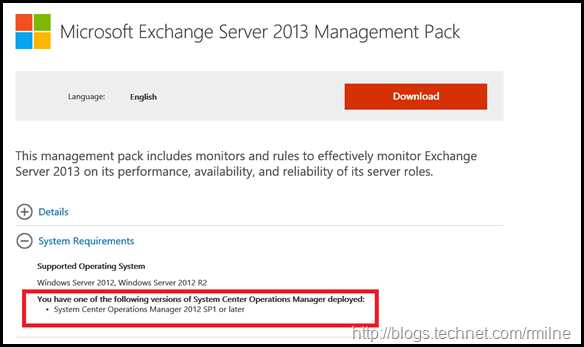 As of June 2015, The Management Pack (MP) is build 15.0.665.19 and can be obtained here.    Before installing the MP, please be sure to review all of the documentation and prerequisites.  A great starting place is the MP Guide.

One of great benefits of running Office 365 is that the Exchange product group can share solutions to scenarios that they see in the service which will benefit on premise installations.  The Exchange Server 2013 Management Pack works with the Managed Availability feature in Exchange 2013. The alerts within the System Centre Operations Manager (SCOM) portal indicate unhealthy states as reported by the Managed Availability components in Exchange 2013.

The following are some of the new features in the Exchange 2013 Management Pack:

What’s The Big Deal With That?

What does that really mean?  Well you will see a radically simpler, smaller and leaner management pack!  Why is this?

Exchange 2013 with Managed Availability is now able to monitor itself and determine if it is healthy or not.  Who better to gauge the condition of Exchange than Exchange itself!    Another benefit is that this can be controlled by Exchange itself in two distinct ways:

Both of these mechanisms will allow for a greater degree of flexibility and agility when monitoring Exchange 2013.  Additionally you may have seen previous issues around the Exchange 2010 Management Pack when it was updated for Exchange 2010 SP2 and then re-released.

One other change that will bake people’s noodles is that changes to monitoring thresholds are to be done in Exchange directly and not in SCOM.  Again this is because Exchange is monitoring itself, and SCOM is responsible for the escalations that are produced by Managed Availability.

Check to see that none of the Alert Values are displayed as unhealthy.  If one is shown in an unhealthy state, then rerun the associated monitoring probe:

All of the Exchange 2013 Management Pack Troubleshooters are documented here.

Other Changes From the Exchange 2010 MP

We already covered that Exchange is now responsible for monitoring itself and SCOM will do the escalation portion of the alerting system.  In addition there are a couple of other changes that are worth highlighting:

Lessons from the Datacenter: Managed Availability