When the office updates were released last patch Tuesday, there were a couple of issues of mine that were resolved.   Great, I thought, let’s download and install them!    After checking that my installed build of Outlook etc. was older than the released updates I downloaded the updates from the Microsoft Download Centre and then went to install them only for it to barf:

After muttering briefly, I realised that I was not actually using a traditional .msi install of Office 2013. I’m actually using a Click-To-Run installation on the MSIT Windows 8 image.  DOH!

But, wait.  Wasn’t my office build out of date?  Part of the advantage of Click-To-Run is that it will automatically update.  Why was this not happening?  One quick Bing search later I noted that in the article Microsoft Office 2013 Click-to-Run virtualization there were steps to retry the Office update :

After updating to Office 2013 SP1, the interface appears different.  Note that there is not a button to check for updates 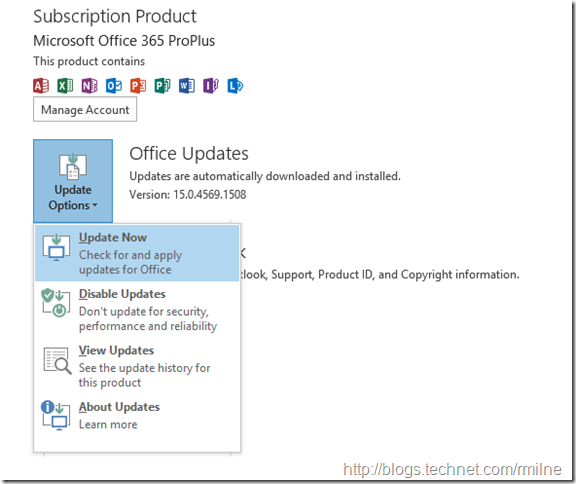 As soon as the updates were re-enabled – boom!  They started to download!

The updates then installed in the background as I continued to use the applications, and only when all the updates had been installed was I prompted to restart them. 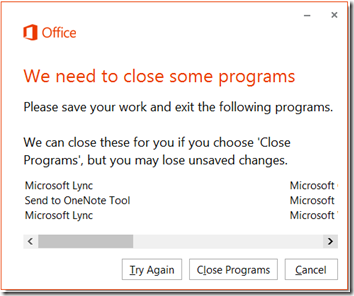 Note that a restart of the OS was not needed here, just the applications had to be restarted.  Again another neat feature of the Click-To-Run package! 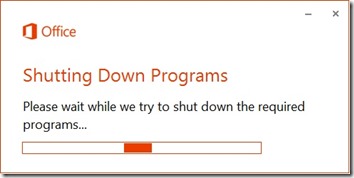 Those of you familiar with App-V will be thinking this is kind of familiar, and it is

.  Click-to-Run is based on App-V, which itself came from the Soft Grid acquisition).

Click-To-Run was launched with Office 2010, and with more and more people moving to Office 365 it is destined to become even more popular!

One thing that you may experience when running Click-to-Run is that some of the traditional troubleshooting tools that expect Outlook to be installed as a .msi will have issues.  Mr MAPI (AKA Stephen Griffin) mentions a workaround on his blog for MFCMAPI to get it to work with Click-to-Run Outlook.