Exchange 2013 CU12 has been released to the Microsoft download centre!  Exchange 2013 has a different servicing strategy than Exchange 2007/2010 and utilises Cumulative Updates (CUs) rather than the Rollup Updates (RU/UR) which were used previously.    CUs are a complete installation of Exchange 2013 and can be used to install a fresh server or to update a previously installed one.  Exchange 2013 SP1 was in effect CU4, and CU12 is the eighth post SP1 release. 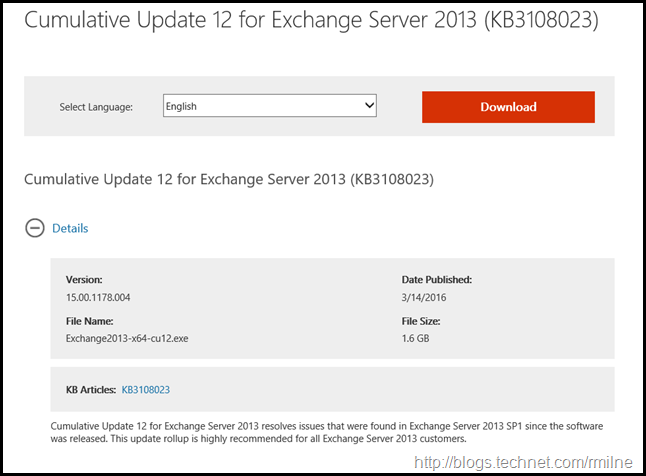 Errors and warnings encountered running this command can be safely ignored provided the final exit status code of 0 is reported in the output.

As with previous CUs, CU12 follows the new servicing paradigm which was previously discussed on the blog.  The CU12 package can be used to perform a new installation, or to upgrade an existing Exchange Server 2013 installation to CU12.  You do not need to install Cumulative Update 1 or 2 for Exchange Server 2013 when you are installing CU12.  Cumulative Updates are well, cumulative.  What else can I say…