Exchange 2013 CU14 has been released to the Microsoft download centre!  Exchange 2013 has a different servicing strategy than Exchange 2007/2010 and utilises Cumulative Updates (CUs) rather than the Rollup Updates (RU/UR) which were used previously.    CUs are a complete installation of Exchange 2013 and can be used to install a fresh server or to update a previously installed one.  Exchange 2013 SP1 was in effect CU4, and CU14 is the tenth post SP1 release. 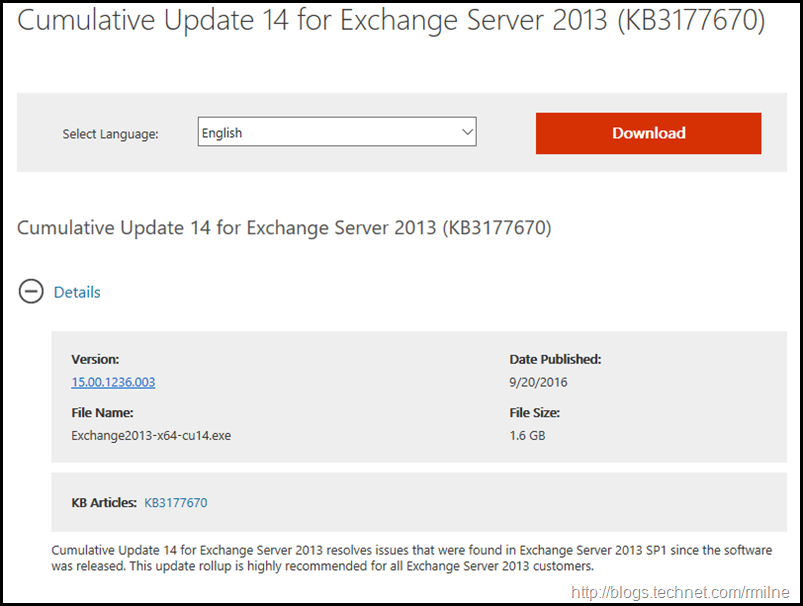 Whether or not your AD Schema needs to be updated depends upon your initial Exchange 2013 version.  This will dictate if the AD Schema needs to be modified.  Check the values as noted in this post.  There may be additional RBAC definitions, so PrepareAD should be executed prior to installing CU14.  If setup detects that PrepareAD is required it will be automatically executed if the account running setup has the necessary permissions.  This was an issue discussed in the MessageCopyForSentAsEnabled  post.

In addition the latest time zone updates are also included with CU14.

Exchange 2013 servers are no longer unexpectedly marked as offline.  Using the setup wizard to upgrade an Exchange Server to a newer Cumulative Update causes an Exchange server to be marked offline in Exchange Active Monitoring during prerequisite analysis and prerequisite installation. If the setup wizard isn't advanced to continue the upgrade process, the server will remain in an offline state until the setup is allowed to proceed. Also, if any of the setup /Prepare* switches are used to update Active Directory on a functional Exchange Server, the server is marked offline in Exchange Active Monitoring.

As with previous CUs, CU14 follows the new servicing paradigm which was previously discussed on the blog.  The CU14 package can be used to perform a new installation, or to upgrade an existing Exchange Server 2013 installation to CU14.  You do not need to install Cumulative Update 4 or 5 for Exchange Server 2013 when you are installing CU14.  Cumulative Updates are well, cumulative.  What else can I say…