Exchange 2016 CU3 has been released to the Microsoft download centre!  Exchange 2016 has a different servicing strategy than Exchange 2007/2010 and utilises Cumulative Updates (CUs) rather than the Rollup Updates (RU/UR) which were used previously.    CUs are a complete installation of Exchange 2016 and can be used to install a fresh server or to update a previously installed one. Exchange 2013 has the same servicing methodology. 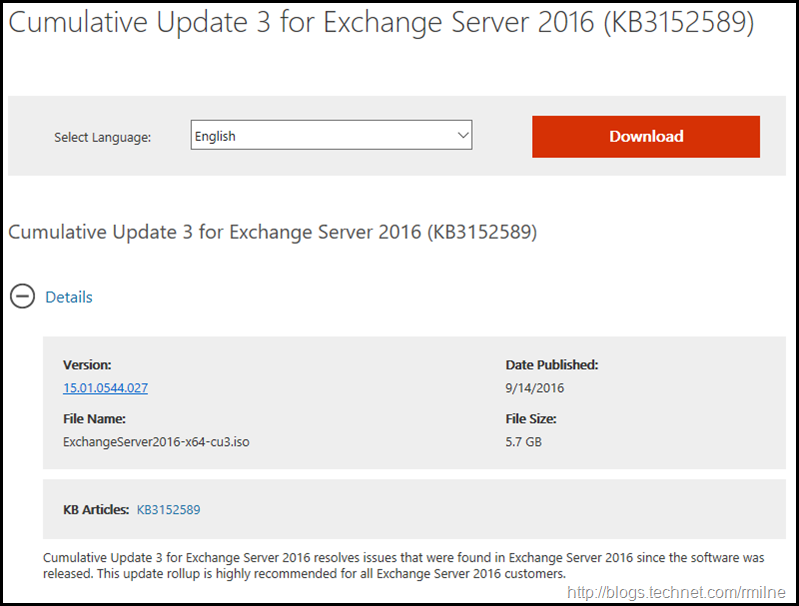 In addition the latest time zone updates are also included with CU3.

Read from Passive is included in CU3.

To align with the Office 365 user experience, CU3 has an updated view of Contact information and Skype for Business presence information.

Using the setup wizard to upgrade an Exchange Server to a newer Cumulative Update causes an Exchange server to be marked offline in Exchange Active Monitoring during prerequisite analysis and prerequisite installation. If the setup wizard isn't advanced to continue the upgrade process, the server will remain in an offline state until the setup is allowed to proceed. Also, if any of the setup /Prepare* switches are used to update Active Directory on a functional Exchange Server, the server is marked offline in Exchange Active Monitoring.