Anyway, you are probably reading this as you did not use the gMSA and need to change the password.  There is a script here to assist should you want to convert to a gMSA.

The process to change the AD FS service account password in AD FS 2012 R2 is more streamlined than in previous versions.  As noted in installing AD FS for Office 365 part one, there is no longer a dependency upon IIS in this version of AD FS.  Because of this, there is no longer a need to then update passwords in the IIS application pool.  We need to concentrate our efforts on updating the password stored by the AD FS service on each STS server in the farm.

In short we have to:

Stop the AD FS service on all AD FS servers.   Use which means you prefer to do this, this could be either the services applet or PowerShell.  In the below example PowerShell is used locally on the server.

Follow your documented process to change the assigned password for the AD FS service account.  This should be then stored so that it is in compliance with your internal security policies and practices.

It is possible that your AD FS farm is deployed in multiple datacentres to provide site resilience.  This may mean that there are additional considerations for AD replication latency to the additional sites.  Ensure that AD has successfully replicated the changed service account password so that the updated password is available to all AD FS servers in the farm.

One potential method is the Active Directory Replication Status Tool.

Now that AD has replicated to all of the locations which contain AD FS servers, we can update the password stored on each AD FS server.

In the example below we are using the services.msc applet, though there are many other ways to do this.  Choose your weapon!

After opening the properties for the AD FS service, select the Log On tab.  Enter the new password, confirm it and then click apply to save the change. 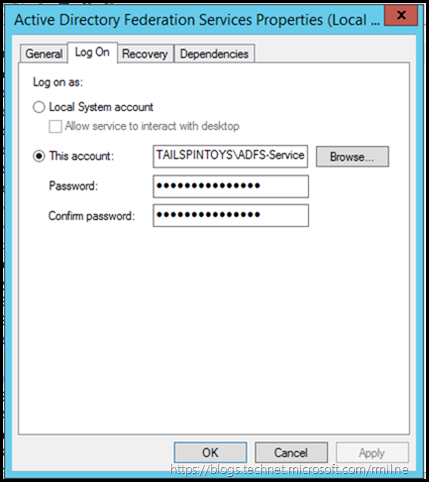 Start AD FS Service on Each Server in the Farm

All AD FS servers have had their service account updated, and we can now start the services on the servers.  In PowerShell we could use:

Ensure that the service starts, and no issues are reported in the event logs.

Also ensure that Web Application Proxy (WAP) servers are running without issues, and their event logs are also clean.

Ensure that you test AD FS is functioning correctly on all servers in the farm, and also that external access through WAP works without issue.