Exchange 2016 CU9 has been released to the Microsoft download centre!  Exchange 2016 has a different servicing strategy than Exchange 2007/2010 and utilises Cumulative Updates (CUs) rather than the Rollup Updates (RU/UR) which were used previously.    CUs are a complete installation of Exchange 2016 and can be used to install a fresh server or to update a previously installed one. Exchange 2013 has the same servicing methodology. 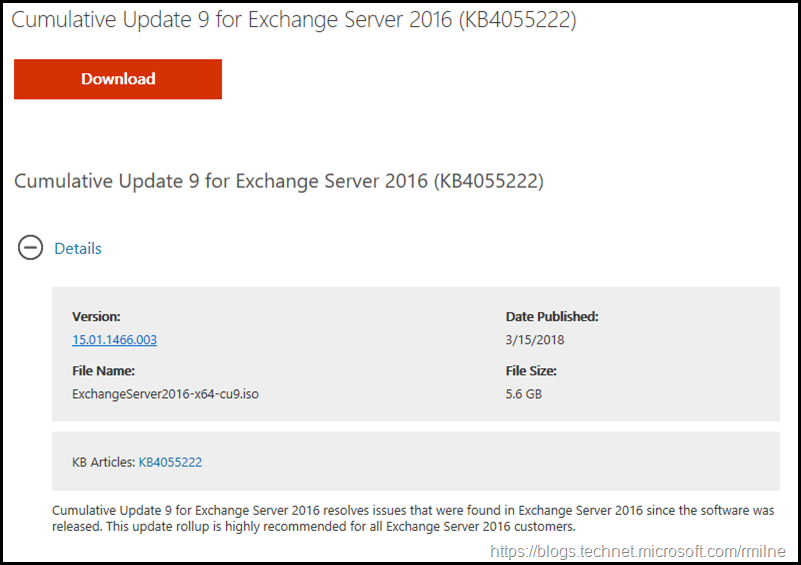 .NET Framework 4.7 is not supported.

TLS 1.2 is now supported on all supported Exchange versions.  Expect to see additional guidance on this subject.  The first post in this series is already available.   This is a work stream that will require attention as Office 365 will enforce TLS 1.2 on October 31st 2018.  This is an extension to the previous announcement, and details are available here.

4077924 Store Worker process crashes when you move, restore, or repair mailboxes that have issues with the logical index within the database in Exchange Server 2016

CU9 includes the security fixes released to address the issues in the March 2018 security bulletin.

4058373 "A parameter cannot be found" error when you run Install-AntiSpamAgents.ps1 in Exchange Server 2016 CU7

4077655 Event ID 258 "Unable to determine the installed file" after you uninstall Windows PowerShell 2.0

4077924 Store Worker process crashes when you move, restore, or repair mailboxes that have issues with the logical index within the database in Exchange Server 2016

While CU9 does not add any new AD Schema changes.  If you are on an out-dated CU currently, then deploying CU9 may contain AD Schema updates for your organisation – please test and plan accordingly!  Whether or not your AD Schema needs to be updated depends upon your initial Exchange 2016 version.  This will dictate if the AD Schema needs to be modified.